Making Waves at the Mirage 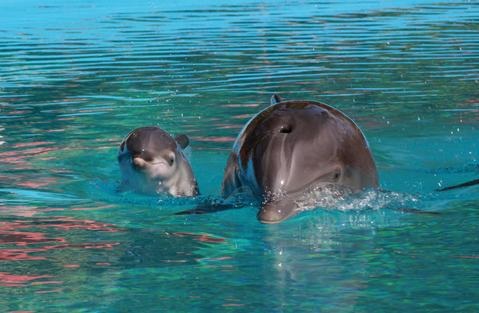 A healthy dolphin calf is getting into the “swim” of things to the delight of guests and staff alike at The Mirage. The energetic female calf was born July 17, to Huf n Puf, who was born at Siegfried & Roy’s Secret Garden and Dolphin Habitat in March 2000. The experienced mother and her calf are in the Birthing and Research pool which is open to public viewing during the facility’s operational hours. The calf’s father, Lightning, is located in another pool

Both mother and calf are doing well. Immediately after delivery, the calf swam unassisted to the water’s surface and took her first breath. The calf, which will soon be named, has quickly taken to her surroundings, is nursing well and bonding with her mother as she closely follows her around the habitat.

“Everyone at The Mirage is thrilled about the new calf and how well she is doing,” said David Blasko, Director of Animal Care at The Mirage. “We invite guests to see the calf and discover how our conservation efforts today will help preserve these beautiful animals in the wild for future generations to enjoy.”

As dolphin calves remain very delicate through their first year of life, the Animal Care staff continually monitors the calf as she tests her independence and explores her new world. While there are several milestones to pass in the coming days and weeks, the team remains cautiously optimistic that they have a healthy new member of their aquatic family.

Siegfried & Roy’s Secret Garden and Dolphin Habitat has earned Humane Conservation™ certification from American Humane, the country’s first national humane organization and the world’s largest certifier of animal welfare and well-being. The Dolphin Habitat at The Mirage also is accredited by the Alliance of Marine Mammal Parks and Aquariums, an international association dedicated to the highest standards of care for marine mammals and to their conservation in the wild through public education, scientific study and wildlife presentations.