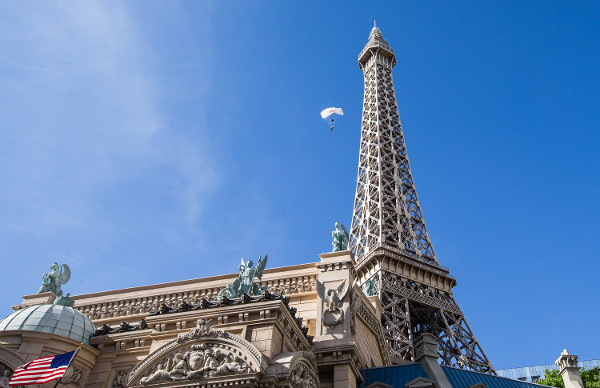 Talk about the sky being the limit!

The Eiffel Tower Experience at Paris Las Vegas paid tribute to the 125th anniversary of the original EiffelTower in Paris, France with an incredible stunt that astounded passersby on the Las Vegas Strip. The highly-visited Las Vegas attraction kicked off festivities in heart-pumping fashion when two Red Bull base jumpers leaped from the top of the 541-foot tower, landing safely in the Paris Las Vegas front drive next to the replica Arc de Triomphe.

“What better way to celebrate this monumental event than with a monumental party on the Strip,” said Regional President David Hoenemeyer as he toasted to the success of the talented Red Bull team. “These guys really know how to capture attention, and that’s exactly what they did here tonight.”

While the original EiffelTower was constructed on March 31, 1889, the half-scale replica at Paris Las Vegas opened in 1999, and has since welcomed more than 10 million visitors. In celebration of the Parisian landmark’s historic milestone, the Eiffel Tower Experience will host a series of ongoing events throughout the year. The newest addition is “Locks on the Bridge,” Las Vegas’ take on the Parisian tradition that enables couples to declare their love by securing a personalized lock to the iconic bridge next to the Eiffel Tower Experience.

The Eiffel Tower Experience is an exact reproduction of one of Europe’s most famous landmarks, rendered meticulously at half-scale. At 460-feet, an experienced ambassador welcomes guests and points out can’t-miss Las Vegas landmarks and interesting historical facts. The tower is open daily from 9:30 a.m. to 12:30 a.m., weather permitting