The Bronx Wanderers: Wandering No More 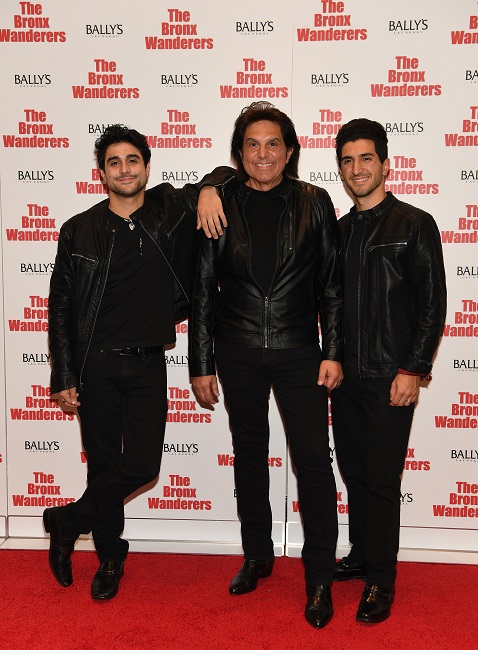 After spending 12 years “roaming from town to town” to perform for sold-out crowds, The Bronx Wanderers have finally found a “home” in Las Vegas. Now it is their audiences who will be taking a journey – an energetic hit-filled trip through the 50s, 60s and 70s -- as the group recreates the magic of those eras with the original sounds and fresh heartfelt renditions of the chart-toppers of those days.

Having recently moved from the Windows Showroom at Bally’s to the Mat Franco Showroom at the LINQ, The Bronx Wanderers’ new show is a musical autobiographical account of the group’s founder and leader Vinny Adinolfi, who performs with his sons, Vinny and Nick, and their band, Having grown up in the same neighborhood as Dion (one of whose biggest hits was “The Wanderer”) as well as Frankie Valli and actors Chazz Palminteri and Danny Aiello, from the time he was a teenager, Adinolfi wanted to break out of neighborhood as they did and become a headliner on the Las Vegas Strip like Engelbert Humperdinck, Dean Martin, and Frank Sinatra, All these years later, his dream has come true.

“My career didn’t really begin until I was 58 – it was late in the game but it worked,” the now 60-year-old Adinolfi smiles. “I could be the poster child for staying true to yourself and never giving up on your dreams. I never stopped.

“I started out at Columbia Records as a copyist. Dion got me the job when I was 17. My first paycheck was $30 but I stayed late and would do anything just to be there,” he continues. “Engelbert, Tom Jones, Julio Iglesias and other big stars were looking for good songs to sing. I pocked songs for them as well as for Reba McEntire, Dion, Alabama, Tanya Tucker. Ray Charles, George Strait and others. I even still get calls today even though I haven’t been on the payroll since the year 2000.”

In fact, Adinolfi enjoyed major success as a gold-record producer, label executive and publisher for Lifesong Records / Cashwest Productions / Blendingwell Music / Sister John Music and PKM Music, earning gold records for several of the albums he produced for those latter artists. But, in 2006, on a whim and prodded by Palminteri, he decided to start a rock ‘n’ roll group with his two sons, who were 10 and 14 at the time and were budding talented musicians,

“The kids hit their stride about two years in,” Adinolfi explains. “I had to ask myself where I wanted to go with this. We had been performing in the neighborhood because the kids were in school and had to be up at 7 am. Still, I knew that eventually I wanted to be a headliner on the Strip. That day came years later when the South Point gave us a shot. Then, Damian Costa, the entertainment director at that hotel, moved from the South Pont to become Regional Director of Caesars Entertainment. Working with our producers, Alan and Kathy Glist, he booked us into the Windows Showroom at Bally’s two-and-a-half years ago where we performed seven days a week until \ Caesars changed the entertainment policy in that room and we were given a home in the main room at The LINQ.”

Adinolfi’s sons are now 30 and 27 and he jokes that the three of them are like Hines, Hines, and Dad, The music in the show is the songs Adinolfi grew up with and is a tribute to his Bronx neighborhood.

“A hit is a hit is a hit,” he maintains. “It’s just great music and will always be great music. I can see that songs like “Who Loves You” by Frankie Valli resonate with the audience because I watch them sit up straighter. Still, I realize that we are going to have to pull it forward a little bit. We’ve put a Bruno Mars song in the show, for instance, along with a couple of other contemporary hits. I designed the show for it not to be about me but about you, Main Street U.S.A., and to make you think about where you were in that space and time when that song was popular. Our audiences basically range in age from 40 to 75 but we are getting a lot of younger people.”

As for where he wants to be in five years, Adinolfi says that his entire goal is to be the next Danny Gans in terms of being the show that everyone has to see when they come to Las Vegas.

“To be named one of the Top 10 shows in town is an honor and a privilege” he says. “Our goal is to establish ourselves in town as an act with longevity. If we can do this for another 10-15 years., it would be wonderful.”

That’s his story and he’s sticking to it.