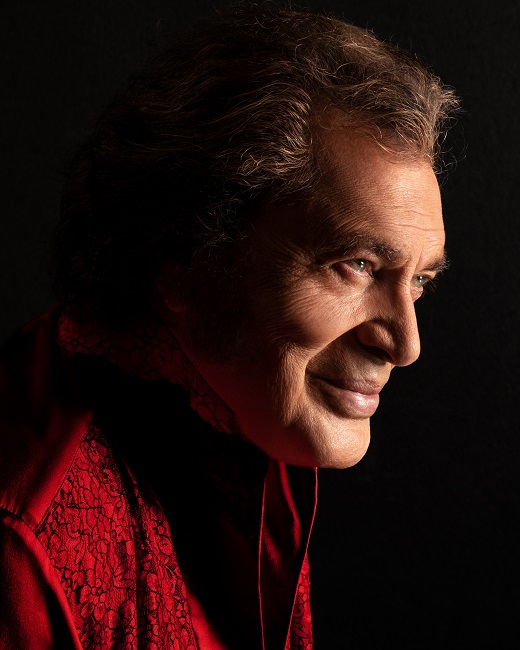 The legendary King of Romance, Engelbert Humperdinck, will be home for Christmas and this Saturday, December 18th, you’ll find him where his lovelight streams – on Loopedlive.com, performing his 2nd Annual Christmas Special

The event is setting the stage on the heels of the success of the iconic international superstar’s 2020’s 1st Annual Christmas Special, which garnered hundreds of thousands worldwide views. Once again, you can count on hum to have you dreaming of a bright Christmas as he sings songs from three Christmas albums he has done in the past as well as some new tunes. And while his first Christmas special was streamed from his Bel Air, California, home, this year home will be the decorated proscenium in a nearby L.A, casino, giving him the opportunity to make his family-oriented show still warm and intimate but a lot different from last year’s.

“My 13-yeqr-old granddaughter, Olivia, will again be singing a song from Nashville, where she lives with my daughter, Louise, and her husband, Tony,” Engelbert notes. “I believe that all three of them will fly in to spend Christmas with me. My son Brad will come over, too. I don’t want any presents. Material things don’t mean much. I just want my family here.”

This year has been a mixed bag for Engelbert with some rough-going both in the personal and professional sense. Besides contracting a serious case of COVID himself, he lost his beloved wife, Patricia, who suffered from Alzheimer’s and died from heart issues following her own bout with the virus. In his grief and without having her to come home to, after some months passed, he longed to get back on the road doing what he loves – performing live for his legions of fans. Though he suffered with some post-COVID issues, as soon as he was well enough, he performed eight shows on the East Coast and two in the L.A. area before setting off for a 14-show tour of the United Kingdom, only to have to cancel after four performances when he contracted viral bronchitis due to the weather there.

But there have been some glowing professional moments as well. Engelbert received the news that he was on The Queen’s Birthday Honour List and was being awarded an MBE for outstanding achievement or service to the community —he was appointed a Member to the Order of the British Empire -- which “thrilled and touched” him. Then a video of his song “Can’t Help Falling in Love,” a duet featuring British singer Janet Devlin from his 2020 EP “Sentiments,” sailed past two million views. He also received an honorary plaque from You Tube for surpassing 100,000 subscribers to his YouTube channel. In addition, he just released his new EP, “Regards.” On it are four tracks: “Funny How Time Slips Away,” Let It Be Me,” “What a Wonderful World,” “Smile,” and a Bonus Track, “Blue Christmas.”

It goes without saying that this Christmas will be poignant and nostalgic for Engelbert. He notes that while his family used to have their traditions that things have changed because of the loss of his wife.

“Things are very different at this point in my life,” the handsome artist explains. “I miss my wife very much. I am in Bel Air in this big house and as I talk, my voice is ringing through rooms of emptiness. Everything stopped but my performing. I just want to get out and work and sing my songs.”

When it comes to the holiday, Engelbert still has fond memories of his own childhood and growing up the second youngest child and youngest son among seven sisters and two brothers. His father was a Colonel in the British Army stationed in India when Engelbert was born and he was raised in India until the family moved back to England when he was 10. He credits his parents with the happiness that pervaded the household and reminisces about his family celebrating Christmas when he was a child.

“Any presents we got, we loved,” he recalls. “When we were living in India, I got a cricket bat. I put it under my pillow for six weeks and slept with it because it was so special.”

“If I could tell young people one thing, it would be to be good to your parents and don’t disrespect them – they are the most important people in this while wide world,” he adds.”When you’re young, you don’t think of parents as being one-offs or that anything is going to happen to them. You take life for granted. It wasn’t hard growing up in a family of 10 siblings. My parents made out lives wonderful.”

Saying that he feels that he and his wife did a great job of raising their four children, he also admits that it wasn’t easy because he was always on the road trying to maintain his career and status as a global entertainer.

“It wasn’t good for my home life –I spent a lot of time on the phone with my family,” he admits. “But it was my job and I had to do it to keep a roof over their heads and keep them comfortable and give the kids a good education. Whether they stayed close to us or not as they grew up was up to them. I will always have love for them.”

As for the approaching New Year, Engelbert is planning a full touring schedule, including a tour of Europe and making up the dates from his U.K. tour. He is hoping that things will fully open up again with this year’s audiences having been limited by the venues to 60-65 percent capacity, a bit heartbreaking for an artist used to performing to enthusiastic sold-out crowds. He is also talking about designing a new format for his live performances and doing a LP country album.

Some of my early songs, such as “Release Me,” were country.” he explains. “They came out of Nashville. There will be some original songs on the album, too.”

Then there is the live streaming. This Christmas special will be the fourth video performance he has done, the first one garnering 250,000 views from the git-go.

“It’s a new thing for me, a new avenue for me to go down,” Engelbert, who is always learning new things and keeping up with the times, exclaims. “I love doing videos on Looped Live. I love always keeping in touch with people. I do a video meet-and-greet after the show – it gives me a great opportunity to talk to the fans. I consider them friends.”

There is no question that, physical presents aside, to his multitudes of followers, Engelbert is the gift that keeps on giving – all year round.