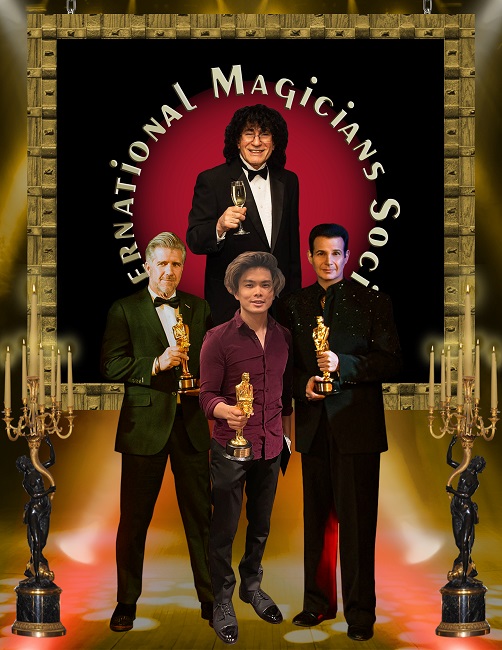 Talented magicians, some of whom may never have had the means or opportunity to advance their skills early in their lives, have transformed into successful, known commodities and are now receiving major awards for their achievements. It’s all thanks to one man, Tony Hassini, himself an acclaimed illusionist who made the International Magicians Society (IMS) appear on the scene 54 years ago. And even though the perennially youthful Hassini is now 80 years old, when it comes to his original mission in founding the IMS, he still has lots of things up his sleeve – no tricks, no wands, no rabbits involved.

A year after he brought the IMS into existence, Hassini created the Merlin Award, which today is the most prestigious award in magic and is akin to what the Oscar is to the film industry. This May, Hassini hosted the Merlin Awards at the Orleans in Las Vegas for international magicians and guests. Among the recipients, three Las Vegas notables were presented with the 24K gold Merlin statuette– Shin Lim, who performs at the Mirage, was awarded Magician of the Year 2022; Banachek, who performs at The Strat, was awarded Mentalist of the Year 2022, and, in what was unprecedented about this year’s awards, Drake Deven received the award for Corporate Magician of the Decade. While these and other accomplished conjurors have now been added to the superstar Merlin list containing the “royalty” of magic including David Copperfield, Siegfried and Roy, Doug Henning, Harry Blackstone, Penn & Teller, and Criss Angel, the honor has a two-fold purpose. Presented to established magicians for which the IMS Board of Directors takes into account showmanship, contribution to magic, and accomplishments, it is also given to up-and-coming magicians to help boost their morale and to help them become better artists in the genre.

“There are many magic fraternities all over the world but each requires magicians to take a test and have two people sponsor them before they can join,” says Hassini. “The IMS is the only magic fraternity where anyone with a love for or desire to do magic can become a member without sponsorship or taking a test. We still charge what we have from the beginning --$50 for a 10-year membership. And with each membership, a person receives 10 full-length magic teaching videos worth $250. This is how we became the world’s largest magic organization as listed in the Guinness Book of World Records. We made it easy for our members to join IMS and we provide them with all the tools they need to learn magic. Also, when a magician receives a Merlin, he believes that he has to become better to live up to the award. As a result, so many magicians became superstars after receiving the honor.

Hassini’s passion for magic began as a teenager. He was born legally deaf in Cyprus in October 1941, in the middle of World War II when Germany was bombing the small island, He never spoke a word until he was 5 when he was hospitalized with an illness and a doctor’s metal tool fell into a sink. With the loud clank, the young Hassini turned his head and his parents realized that he wasn’t totally deaf and learned that he could be helped by hearing aids. It was then that he said his first word, “Mama,” to his mother’s joy and tears.

Soon discovering that he also had dyslexia, Hassini was way behind his age group and was constantly bullied in school so he dropped out in the fifth grade. He was so shy he couldn’t look people in the eye when he spoke to them; he would look down at the floor. At age 16, he moved to London, England, and got a job in a magic shop, where he was mentored by the owner. He worked in the shop for four years during which time he became established in England in his craft. Every time he performed a new trick, people looked at him like he was somebody. Magic gave him confidence. Wanting others to benefit as he did, he founded the IMS in 1968 and remains its Chairman/CEO.

Hassini has no illusions about where he wants to go from here. He is working on a TV magic series called “100 Countries, 100 Mysteries” and had already spent 60 weeks filming segments in 20 different countries when the pandemic hit and he had to stop. Moreover, besides completing the series, he has a vision to travel the world and handpick extremely talented young magicians from Third World countries such as Venezuela, Cuba, India, and Mongolia and give them “the opportunity of a lifetime.” IMS will pay for their airline tickets to Las Vegas and their hotels and will give them an award and let them perform in front of their peers.

“We want to give an opportunity to these young people who have no chance to be discovered or to make it on the international stage,” Hassini, who owns a home in Las Vegas but primarily lives in New York, sums up. “Upon returning to their countries, they will have a voice and will speak on behalf of their countrymen. This is my hope and dream.”

If anyone can make a vision materialize into reality out of thin air, it’s Tony Hassini.