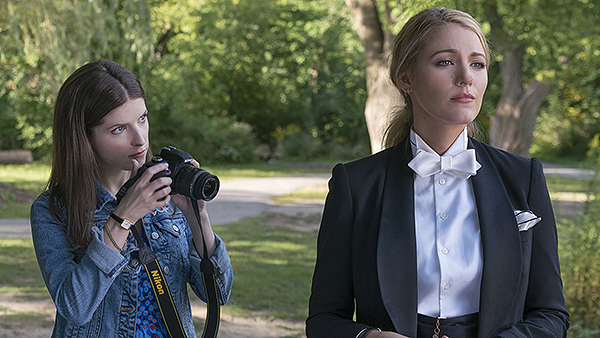 Director Paul Feig has built a reputation for helming very funny and entertaining female driven comedies (Bridesmaids, The Heat, Spy, Ghostbusters) and this time he tackles the mystery thriller genre with A Simple Favor. Based on the trailers, one would expect the film to be a tense and suspenseful drama. Instead, Feig delivers what can best be described as a dark comedy that is uneven and, at times, ridiculous. What it does have going for it are the terrific performances by the two female leads, Anna Kendrick and Blake Lively, who rise about the material and sink their teeth into their respective roles.

Jessica Sharzer's (“American Horror Story”, “Nerve”) script, based on Darcey Bell's book of the same name, centers around Stephanie (Kendrick) a bubbly but lonely, Connecticut widow with a young son named Miles (Joshua Shatine), who finds herself drawn into the mystery surrounding the disappearance of her best bud.

When not volunteering for everything at her son's elementary school, Stephanie is busy with her own mommy video blog. One day while picking up Miles from school, Stephanie meets his best friend's mother, Emily (Lively), a glamorous, fabulously dressed, hot shot public relations executive that lives in a mansion with her handsome and charming, writer husband Sean (Henry Golding, Crazy Rich Asians). Although polar opposites, the two women form a quick bond, with Stephanie spending her free time with Emily at her upscale mansion where they share dark secrets over strong martinis.

A few weeks go by when suddenly Stephanie gets a call from Emily asking for a “simple favor”. She has to put some fires out at work and is stuck in Miami. Sean is away in London for a family emergency and so she asks Stephanie to pick Nicky up from school and watch him for a few hours. The ever agreeable Stephanie, of course, says yes. Soon, hours turn to days and when Emily doesn't answer her cell or texts, it appears that Emily has vanished and may never return. The cops are called to investigate, but Stephanie decides to do some investigating on her own, vlogging to her viewers about her missing “best friend” and digging into Emily's past, while becoming closer to Emily's husband. It turns out, Stephanie isn't as innocent or naïve as she seems.

As the plot unravels, it becomes clear that the enigmatic Emily has some skeletons in her closet she didn't want revealed. Why was Emily was vehemently against having her photo taken? Was she murdered, or was there more than meet the eye? What comes into play are a series of twists and turns, betrayals, double crosses, back stabbings, a few red herrings, revenge, and revelations, much of which force you to suspend disbelief.

No doubt, Feig is a great comedy director and loves working with women. His film resume track record says it all. But by attempting to make a Hitchcock type thriller, he missed the boat by not staying faithful to the genre. The injection of humorous dialogue and other comedic moments overshadow any real sense of tension or suspense to keep you on the edge of your seat. As a hybrid, it just doesn't work. My advice to the director is that he should have stuck to a serious tone which is relevant to any psychological thriller, unless, of course, it was meant to be billed and marketed as a comedy thriller, which it was not.

Make no mistake, other than the premise of a missing woman and calculating motives behind her disappearance, the comparison ends between A Simple Favor and 2014's Gone Girl, the excellent, beautifully executed, Oscar nominated mystery thriller.

For what it is worth, although I was disappointed, simply put, A Simple Favor is watchable for the performances alone.