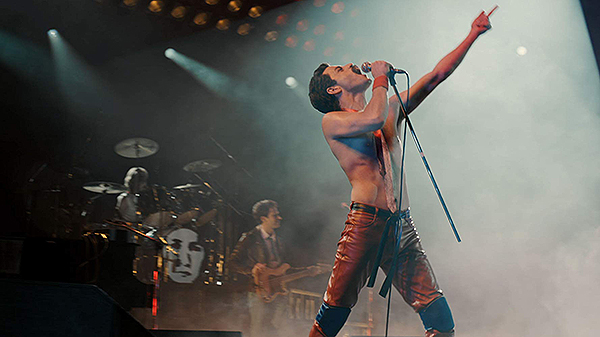 Any music fan will agree that Queen, and their charismatic lead singer/ frontman, Freddie Mercury, was one of the greatest bands in the history of rock music. That said, the long awaited biopic, Bohemian Rhapsody, tells the story of the band's rise to fame with the focus on Mercury, whose hedonistic lifestyle led to his tragic death in 1991 from Aids at the age of 45.

When I learned that Rami Malek (TV's Mr. Robot) was cast as Mercury after Sasha Baron Cohen, reportedly, had left due to artistic differences, I doubted whether Malek could truly pull it off. After all, portraying the iconic larger than life rock star was a tall order to fill. No pun intended, I didn't think Malek had the stature. At 5'9” tall he appears much shorter than Mercury, who was actually 5'10”, but seemed to be much taller. Also, I didn't see any resemblance. Yet, my uncertainty fell by the wayside after watching his convincing, electrifying performance. Adorned in lookalike mustache, fake teeth, hair, and outrageous costumes, Malek does a fantastic job, channeling the essence of Mercury and bringing him back to life, on and off the stage complete with flawless lip syncing, signature struts and moves. However, I must say, in the beginning, those false teeth he had to wear for his transformation into Mercury was very distracting. He seems uncomfortable wearing them, and so do we, watching him. But as the film progresses it becomes less bothersome as they settle in for the actor and has it under control to brilliantly capture the look, talent, humanity, sadness, and internal demons of the rock legend.

The film starts with the introduction of Farrokh Bulsara (Mercury's real name) a Parsi immigrant from Zanzibar, raised in England, whom we first see working as a baggage handler at Heathrow airport, circa 1970. His dreams of being a rock star kicks into gear after a chance meeting with the band, then known as Smile, leads to him joining their group as lead vocalist. The rest, as they say, is history.

Other than being a big fan of their music, I don't claim to know much about the band and their back story, but the script, written by Anthony McCarten (Darkest Hour, The Theory of Everything) and directed by Bryan Singer (X Men series) gives us an insightful glimpse behind the scenes, including the creative songwriting process and in studio making of some of Queen's biggest hits, such as Bohemian Rhapsody, a six minute “epic poem” that mixed genres and crossed boundaries. We get to witness the bandmates' interactions, but more specifically, the story centers on Freddie and his inner struggles and professional and personal relationships that include the one true love of his life, former fiance Mary Austin (a sensitive, glowing performance by lovely Lucy Boynton). After coming out to her and admitting he is bisexual, Mary's love for Freddie never subsided and she continued to be his closest, lifelong friend and confident. She and Malek have great chemistry and their scenes together are emotionally riveting. In another significant role, Allen Leech (TV's "Downton Abbey") portrays Freddie's lover, Paul Prenter, his personal assistant turned manipulative, controlling manager. And, an almost unrecognizable Mike Myers makes a brief appearance as EMI executive Ray Forster.

As for the casting of Queen bandmates, Ben Hardy ("X-Men: Apocalypse") portrays drummer Roger Taylor, Joseph Mazzello plays bassist John Deacan and Gwilym Lee bears a strong resemblance to guitarist Brian May. Each does a fine job with what are essentially small roles. Single Freddie (who shared his home with several cats he adored), called his married bandmates “family”, but we don't get to know much about them as the emphasis is on him.

Bohemian Rhapsody has its flaws. There are a few narrative issues and faults in some of the time lines. Yet, they are minor, considering I was glued to the screen by Malek's fierce portrayal in this engaging, well paced story that features some of Queen's classic hits that will have you singing along.

While we know what caused his demise, the story doesn't follow Freddie's physical decline and there are no deathbed scenes. Rather, the film ends on a high note with a magnificent recreation of his reunion performance with Queen at the historic Live Aid concert at London's Wembley Stadium in 1985, reproduced almost in its entirety that celebrates the music and the legacy he left behind. It was a great way to close this film.

Bohemian Rhapsody may not be a masterpiece like the song from which the title is derived, but all things considered, it is pretty darn good, WILL rock you, and deserves a high recommendation.