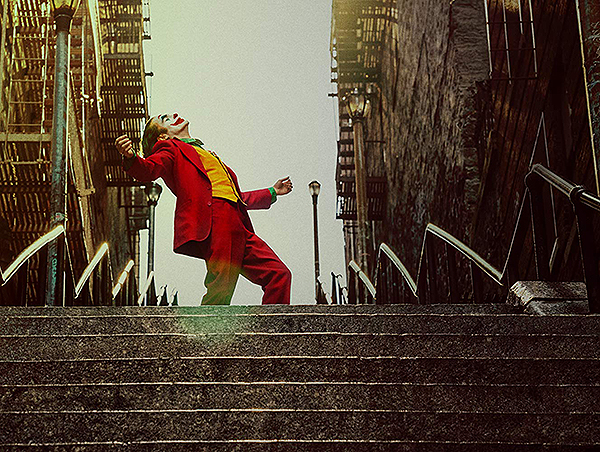 Todd Phillips, known for helming male dominated comedies such as Road Trip and The Hangover Trilogy moves to the dark side, and I mean “very” dark side, with Joker, an original fictional story that he directed and co-wrote with Scott Silver about the origins of Batman's arch nemesis, The Joker.

Several actors have played the iconic DC comic book character, from Caesar Romero in the 1966 Batman TV series up to Jack Nicholson in 1989's Batman and the late, great Heath Ledger, who rightfully won the Oscar for best supporting actor for his harrowing portrayal in 2008's The Dark Knight.

Yet, Joaquin Phoenix's Joker is something we have not yet seen, and it is a doozy. The actor has built a reputation for being eccentric, to say the least, and on occasion, has behaved more than a bit off the wall. It questions how much of a reach this was for him to play a character that becomes unhinged. In any case, Phoenix makes this role his own, leaving an indelible mark by embodying all aspects of Arthur Fleck, that led to his transition into his menacing alter ego, Joker. Phoenix not only mastered a maniacal laugh that Arthur is unable to control when under stress, the actor was so committed to this role that he reportedly lost over 50 pounds to inhabit Arthur/Joker's persona and almost emaciated looking body. His no holds barred, gut wrenching, chilling performance, is a shoe in to land him an Oscar nomination, if not the award.

Phillips has taken the Joker out of the comic book and rather than having him inhabit the look and feel of a comic book world on the big screen, his story is set in the true to life environment of Gotham City (portrayed by NYC) circa 1981 (Blow Out & Zorro The Gay Blade can be seen advertised on a movie theatre marquee). One thing is evident and that is Phillips' Joker was inspired by Martin Scorsese's Travis Bickle in “Taxi Driver” and Rupert Pupkin in “The King of Comedy, both portrayed by Robert DeNiro, who has a small but pivotal role here as Murray Franklin, a popular late night TV talk show host.

What unravels is not a pretty picture, in more ways than one. Gotham City is filthy, marked by its garbage strewn, rat infested streets. Among those struggling to get by is Arthur Fleck (Phoenix), a single man dependent on meds, that lives in a dark and dingy apartment he shares with his sickly mom, Penny (Frances Conroy). By day he works as a clown for hire, but dreams of pursuing a career as a stand up comedian, not realizing he isn't funny.

Day to day life hasn't been easy for Arthur. He has had to withstand constant ridicule, bullying, and getting beaten up by teenage thugs on the street. Things come to a head when he is harassed and then beaten by a trio of young Wall Street professionals on a subway. Arthur loses it and fires the gun, given to him by a co-worker, to kill them. Soon after, these train murders are reported by the media as an act of “a clown vigilante”, which sets in motion the clown faced Joker becoming a symbol of a violent, resistance movement.

How does the future Batman, aka Bruce Wayne, fit into this scenario? His father, millionaire Thomas Wayne (Brett Cullen) is running for Mayor and looks down on the lower class, causing him to be a target of a mob of vengeful, angry men in clown masks, that a preteen Bruce, unfortunately, gets to witness. The elder Wayne also has a connection to Arthur's mom, but that is something I refuse to divulge as movie goers need to discover for themselves.

Without revealing more, Joker is essentially a character study of a mentally ill, delusional person and how a tragic history of child abuse, traumatic head injury, a faulty mental health system and pent up anger can cause an unstable person to snap. Arthur isn't a likable guy. He is creepy and scary but Phoenix manages to make you feel sympathy for a character that is a product of his past and environment.

There has been controversy surrounding this film because of its timely political and social undertones that pits the rich and powerful against the more down trodden working class, that could incite acts of violence. I can only pray it doesn't.

I repeat, this is not a pretty picture to watch. It features graphic, bloody, violence and is very unsettling, if not disturbing. Nevertheless, I have to commend Phillips for successfully crafting an original film based on an iconic comic book villain in a way that has never been done before.