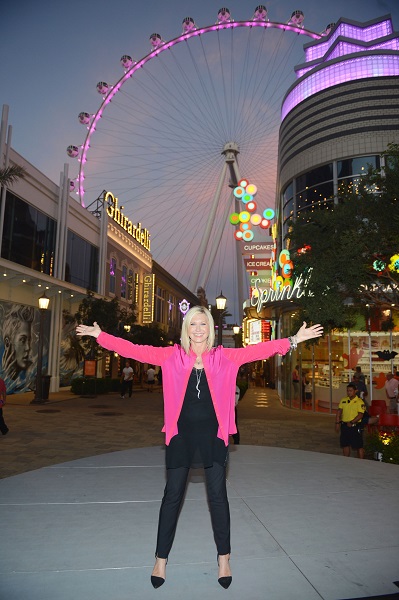 Olivia Newton-John has been “hopelessly devoted” to her career for 50 years, which is readily apparent in her Flamingo residency show called “Summer Nights,” which was recently extended by popular demand through September 12, 2015. Still, the fact that she is still going strong after that period of time is something that amazes her.

“Where did those 50 years go?” she waxes philosophically during our phone interview. “I’m so grateful to still have a career after 50 years and so lucky to be loving it and doing new things. I’m so grateful.

“I think that our life experiences shape us in every part of our life,” she continues, talking about how she has changed over the years. “I was nervous when I was young – that’s just who I was. I enjoyed performing but it was always a little nerve-wracking. Now I always have nerves because that’s normal but I’m enjoying trying new things vocally and the creative aspect of putting this show together. It is the show I wanted to do. It’s not necessarily Vegas but it is me. It’s me and my music.”

“Summer Nights” is a musical journey of Newton-John’s lustrous career. She acknowledges that her career is her whole life experience – the lessons she has learned, the gains she has made.

“With age comes wisdom…you hope,” the down-to-earth singer cajoles. “I’ve learned that laughter is the most important thing and not to sweat the small stuff quite as much. No matter how dim the situation is, laughter gets you through any situation. I’ve learned to laugh at myself. I’ve never taken myself too seriously anyway. I have more boundaries now and I appreciate manners and privacy. You get to recognize what’s important to you.

“I’ve never been carried away by success,” she adds. “I think it’s just my nature. I was taught early on not to believe my own press. I’ve always been aware that someone else would be standing on that stage the next night and that the audience would be applauding for that person. I had kind of spurned academics so I never thought I was doing the right thing anyway. Plus, my dad had wanted me to be an opera singer and I always had to fight for a compliment. I always had a reality check. But before he passed away, he told me that my singing was great.”

It is no secret that Newton-John, while leading a charmed life on many fronts, has also experienced more than her share of traumas. Among them, her Flamingo residency, originally scheduled to debut in 2013, was postponed due to the death of her sister, who had brain cancer. In conjunction with the Vegas shows and in tribute to her sister, Newton-John released a new EP in April 2014 entitled Hotel Sessions, which consists of seven tracks of unreleased demos that were recorded between 2002 and 2011 with her sister’s son, Brett. The new CD, which was released both physically and digitally, contains cover tunes, including the song "Broken Wings," as well as some original songs written by her and Brett.

Another traumatic occurrence, of course, was Newton-John’s own very public battle with breast cancer, with which she was diagnosed in 1992 and overcame successfully. The experience inspired her self-penned and produced album, “GAIA,” her most personal album, which reflected upon her experiences with cancer. Through it all, she gained greater self-awareness and became a positive inspiration to millions of people battling the disease, talking openly about her personal fight and promoting public awareness of the importance of early detection. Her personal triumph over cancer led her to announce her partnership with Austin Health and the creation of the Olivia Newton-John Cancer and Wellness Centre on the Austin Campus in her hometown of Melbourne, Australia, for which she raised $200 million. The ONJCWC, which opened on June 22, 2012, provides a comprehensive range of services and facilities for cancer treatment, education, training and research including a wellness center for the mind, body and spirit.

As to how she has dealt with these and the other upsets she has sustained, Newton-John responds, “No one escapes things. Every human being goes through pain and difficulties. Mine have just been more public. But I’ve always believed that this, too, will pass and I’ve always had a deep knowing that I would get through it. It’s all made me realize that I am quite resilient. And I’ve always been able to feel the beauty of the moment. Even during my saddest moments, I was able to appreciate a bird outside or the sight of a sunset, or a tree or a flower… anything that grounded me to nature’s beauty. It put me back into reality and to being grateful for what I have every day.”

In tandem with that, Newton-John says that she wouldn’t change anything about her life because she wouldn’t be where she is today. She says that she is happy and that it is happiness that keeps her looking so good – she will be 66 in September. Of course, that joy is due in great part to her having a “wonderful husband,” John Easterling (“Amazon John”), whom she married in 2008 and who is the founder and owner of Amazon Herb Company, as well as a beautiful daughter, Chloe, born in 1986 to Newton-John and her first husband, actor Matt Lattanzi, whom she divorced in 1995.

“John gives me handfuls of herbs three times a day,” Newton-John laughs. “But we live in a beautiful place and we walk every day. Nature and animals are very important to me – we have a dog. I have fantastic friends and they come to visit me in Las Vegas. And I’m very happy about the way I’ve been received in Vegas and with my living routine here. I have a wonderful life – I can’t complain.”

Especially because to her fans, she’s still “the one that they want.”