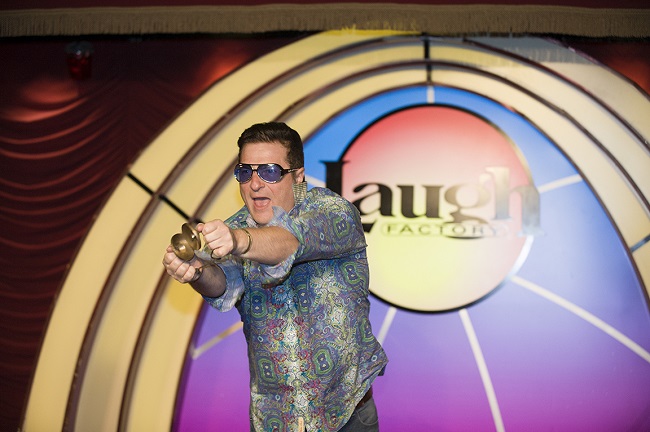 When people want to access the teachings of the Dali Lama, they look to the Far East.

For those wanting to access the teachings of Tommy Lama at the Laugh Factory at the Tropicana in Las Vegas, they, too, have to look to the far east – in this case, Brooklyn, New York.

That’s where this self-appointed comedic guru styled after the Dali Lama began bending the laws of spiritualism to hilarious advantage. Ironically, he was in law school at the time dealing with laws that were not quite so humorous…or bendable.

“During my first year of law school, I was lost and didn’t know what I wanted to do,” Tommy Savitt, a.k.a. Tommy Lama, explains. “So I went into a split summer program. I joined the Marine Corps as a Judge Advocate General and would make my drill instructors laugh. I left the Marines with a week and a half to go because they were going to consolidate the program and I wasn’t going to take a leave of absence from law school. My drill instructor told me not to go into law but to become a comedian.

“I began hitting comedy clubs in my second year of law school,” he continues. “I loved it; it became my passion. I was able to get onto regular shows because I had a following from law school. I worked at clubs, on the road, at military shows, prisons, and private parties. And I haven’t stopped since. I passed the bar and was licensed in New York and Connecticut for general practice. I did a little bit of law but have stopped altogether and have retired my licenses.”

Savitt was doing an act he created in which he was a clueless lothario when a club owner in Florida suggested adding a self-help twist to it.  The comedian took his advice and Tommy Lama was born.

“My act is interactive and changes from night to night depending on the audience,” Savitt explains. “The most challenging part is constantly thinking of new material, which I am always doing. Las Vegas is an entity onto itself. It’s similar to the East Coast in the sense that it can be edgy and politically incorrect and no one flinches Self-help is the Zeitgeist mind frame of everyone,” he adds. “I touch on all areas of self-improvement from chakras and eating habits to achieving financial abundance. It relates to everyone; everyone is looking to improve. I am the teacher with the authority – the people in the audience are the students.”

As for what he finds the most fun about his act, he says that it is the creativity and uniqueness of what he does.

“People are on the edge of their seats wondering what’s going to happen next,” he expresses.

One thing is for certain – laughter rules.