Olivia Taliaferro: Glowing in the Light of a Suoerstar 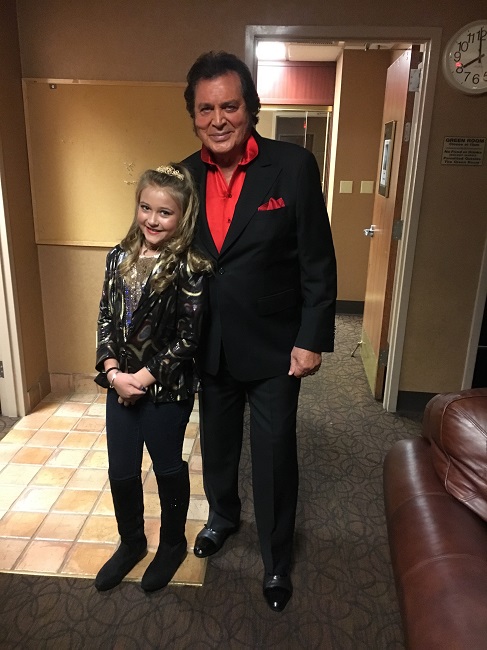 In 2017, America watched as a 12-year-old female ventriloquist walked away with the million-dollar Las Vegas residency top prize on “America’s Got Talent” with the runner-up, a female singer, being only 10. But on September 23 and 24, 2017, nine-year-old remarkably talented Olivia Taliaferro faced two sold-out Vegas audiences at the Orleans as she made her debut singing a beautiful duet with her legendary international superstar grandfather, Engelbert Humperdinck, proving even further that the old adage “children should be seen and not heard” is a definite misnomer

Via video this time, Olivia will reprise her performance with Engelbert at the Orleans  February 10th and 11th singing the very touching song, “I’m Glad I Danced with You,” written by her parents, Louise Sarah Dorsey (Engelbert’s daughter) and Tony Taliaferro, and their longtime friend Jim Martin. It is a tribute to Olivia’s grandparents’ love story and is the one and only duet on Engelbert’s latest album, “The Man I Want to Be,” consisting of several original songs mixed with some Engelbert-style covers of classics and hits by the likes of Bruno Mars and Richard Marx. For Olivia’s part, it is certainly not child’s play. With Engelbert having recently made public his wife, Patricia’s, 10-year battle with Alzheimer’s and the album being a loving tribute to her, Olivia sings the lines his wife would sing if she could as he fervently hopes that a cure is around the corner.

“I was scared and excited,” Olivia admits about getting on stage for the first time. “My daddy bought me a dog so that I would do it and my mom picked the puppy out. But when I sing, I feel like I’m floating. And it’s fun. It takes me away from everything.”

Since her debut in Las Vegas, Olivia has performed the song with Engelbert live on stage in England. When she is not able to join him as he tours the world, she duets with him via video that he plays during his performances.

As for the song itself, dad Tony reveals that he had the idea for the duet for a lot of years. He says that the problem, however, was that it was in two different keys and he had to get it back together. At three years old, Olivia was singing Adele’s ‘Rolling in the Deep.’ She started singing harmony in the car to the radio when she was six or seven years old, long before she knew what harmony was.

“She has a natural ear,” he acknowledges.

“Olivia has been around my mum a lot,” adds mom Louise, speaking about what the song conveys. “She goes with her to her acupuncture appointments. She has great empathy for a young child.”

While Olivia says that she practices her music once a week at home in Nashville, she and her grandfather often sit around the kitchen or dining room table at his home in California and do music together and talk back and forth. Olivia may also draw as they communicate – she is also an excellent artist.

“When success comes, remember that it can go as fast as it came,” Engelbert advises Olivia. “So you have to be able to handle it mentally by not letting it go to your head. If you have been brought up right, it should never happen.”

While Louise notes that it is Engelbert’s music that Olivia has been falling asleep to since she was 16 weeks old and that she has a phone play list beginning with “After the Loving,” the female artist who has influenced her the most is Ariana Grande.

“I like the power in her voice,” Olivia says. “And she can mimic other artists like Britney Spears.”

Is there another piece of advice that her grandfather has given her to help her achieve her dreams?

“He told me to write an original song,” she responds.