And Let There Be Lights 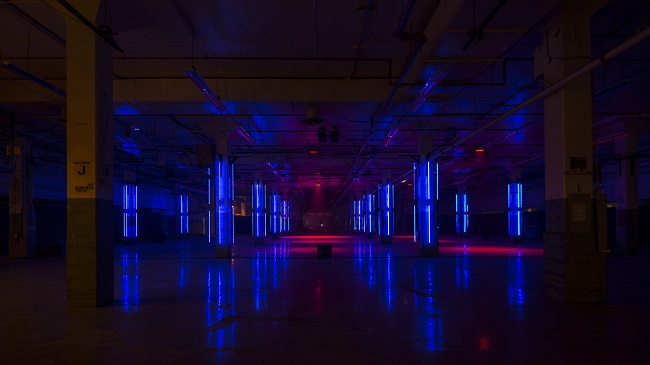 A fresh concept walked into the Corner Bar…and it ultimately LED to a total Fiasco.

To get the “punch” line, you only have to look as far as Corner Bar Management founder Ryan Doherty. In this case, “he saw the light” and turned his vision into a wallop-packed LED unconventional reality called Museum Fiasco, which currently houses “Cluster,” an award-winning immersive light and sound installation by Playmodes Studio out of Spain.

The 5,000 square-foot Museum Fiasco, located on the mezzanine inside AREA15 at 3215 S. Rancho Dr., is Las Vegas’ first Kunsthalle-style museum, which is a non-collection-based museum hosting rotating exhibits. “Cluster” pushes boundaries in light, technology, and creativity in a large-scale audio-visual experience, presenting a dynamic, interactive show that engages the senses. The virtuosic play tells a story through a collection of lights that strobe in harmony with the extraordinary soundscape. The 360-degree experience explores the chaotic feeling of being inside the kernel of a glitchy computer processor.

“Like any museum, we built a white box that lets artists show their work,” says Doherty, Museum Fiasco’s director. “It’s non-traditional along with the fact that the art exhibits are a bit unconventional. There are six artists involved in “Cluster” and it is light and sound-based art. The museum is an open space with columns -- the room is square with mirrors on all-four walls that give an incendiary effect. The light exhibit thunders with volume and you feel like you’re pleasantly trapped in a mosquito zapper. When it comes to sound, the exhibit vibrates you, again in a pleasant way.”

“There are two 12-minute shows that repeat,” he adds. “A visitor can stay as long as he or she likes. We’ll do one exhibit at a time. We plan in changing the exhibits on an annual basis but because of COVID, it will probably be two years before we change “Cluster.” Normally we would have 50-60 people at a time. But now, we have 25 people at any given moment. Downstairs, we also have a 2,500-square-foot bar. Both in Museum Fiasco and at the bar, we are adhering to social distancing and masks. This is more spectacle than a traditional museum. I want people to understand the audio-visual experience. That is the most important thing.”

Doherty is not new to major entertainment experiences. He used to produce the music and art festival in Las Vegas known as “Life is Beautiful.” With art being important to that event, he first worked with Playmodes four years ago, Then, when he had to chance to take space inside AREA 15, he wanted to take that chance with Playmodes.

“In a world of LED, light and sound exhibits are world-renowned,” Doherty notes. “I’ve worked in that space long enough to see human behavior and how people are consuming art these days. Content is heavy on social media and people take videos instead of going to a space these days. But I knew that kids would go for this. It’s designed for those 13 and up – there is no ceiling on age where enjoying Museum Fiasco is concerned.

And let there be lights, not just for the holiday season but all year round.