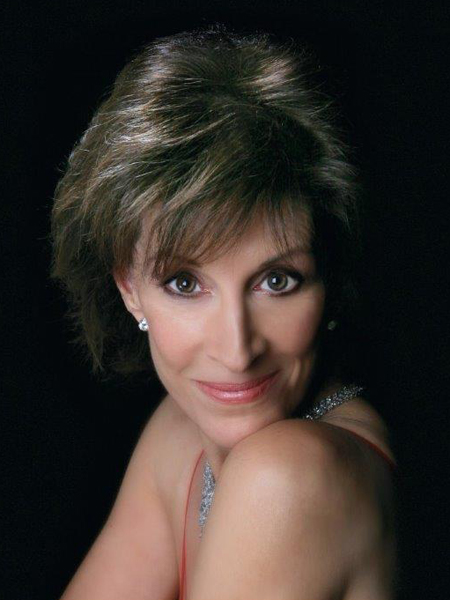 When Deana Martin was a young girl of 9 or 10, her grandmother taught her to make Pasta Fagoli and told her that the dish would be Deana’s special connection to her dad, Dean Martin. After her grandmother died, Deana made it for her father as a present.. Even though the beloved Dino passed away on Christmas Day 1995, Deana is still “stirring the pot.” She is ensuring that, pasta and other ingredients aside, “memories are made of this."

Recollections of her father, family and friends, along with good old-fashioned tradition, have become Deana’s special connection to her audiences. She will be “cooking” on stage in the Cabaret Jazz Room at The Smith Center this coming weekend, December 20-22, serving up a full plate of music and entertainment in her Christmas show. But in the spirit of wanting to conjure up some new memories for people, as well as those from days gone by, Martin won't just be bringing classic holiday delights to the tables.

“I will also be doing some selections from my new album,” she says. “There are some great standards on it such as ‘Destination Moon,’ “’I Love Being Here With You,’ ‘Beyond the Sea,’ ‘Baby Ain’t I Good To You,’ ‘About a Quarter to Nine’ and more as well as some new original songs, including ‘Where Did You Learn To Love Like That’ and ‘Paradise,’ both written by L. Russell Brown. I duet with my dad on ‘True Love’ on the album.”.

“Johnny Rotella, who wrote ‘Nothing But The Best’ for Frank Sinatra in 1962 was 92 when he came to my recording session,” she adds. “He is now 94. Frank was the only artist who ever recorded that song and, 50 years later, Johnny gave it to me to sing and record on the album. Johnny also wrote ‘Baby-O’ for my dad with Johnny Mercer.”

Besides doing a duet with her father on “White Christmas,” some of the Christmas classics Martin will be singing in her Smith Center show include “Let It Snow,” “Winter Wonderland,” “Jingle Bells,” and “Silver Bells.” She tells a great story about the latter favorite.

“Jay Livingston and Ray Evans wrote ‘Silver Bells’ for the movie The Lemon Drop Kid starring Bob Hope,” Martin relates. “They wanted to dedicate the song to the folks that stand on the street corners ringing bells at holiday time so they initially called it ‘Tinkle Bells.’ When Ray Evans went home and told his wife, Lynn, the name of song, she said to him, ‘Are you crazy? Do you know what people think of when they hear the word, ‘tinkle?’ So they ended up changing the title to ‘Silver Bells.’”

Insofar as her personal Christmas memories growing up in a family of seven children, she recalls that the entire family would go down  to the train tracks in downtown Los Angeles, which is where Christmas trees were for sale, to pick out theirs. Because their living room ceiling was two stories, high, they always got a very tall tree and dad Dean would take out a tall ladder and get up on it to string the lights. No one else was allowed to put the lights on the tree.

“He’d tell us kids to stand back and look for the holes in the tree where there were no lights,” Martin smiles. “We would get to trim the tree after that and fill in the holes. Where the tinsel was concerned, Dad wouldn’t let us throw it – we had to put it on one strand at a time. Then, Christmas Eve, we would go to mass at Good Shepherd Church. I was baptized there, took my first Holy Communion there, and I sang for President Kennedy there. Frank Sinatra’s mass was held there, too. But we could each open one present on Christmas Eve and when we woke up on Christmas morning, we knew that Santa had been there, With seven kids, there were about 70 presents under the tree.

“I remember that Christmas carolers would come by on Christmas Eve,” she continues, “even Les Brown and Artie Shaw, who were known as ‘Hymn and Hangover.’ They would show up at the doors of the houses in our neighborhood and everyone would invite them in for a hot toddy. By the time they got to Lucille Ball’s house, they were smashed.

“I also recall our New Year’s Eves when we lived in Beverly Hills,” she muses. “We would be given pots and pans and spoons and would go outside and make as much noise as we could – thinking that it was midnight. In reality, it was only 0 p.m. but we never knew it because we were watching pre-recorded festivities in New York and saw the ball drop at midnight there. After that, we’d go to bed.”

Christmas is also a bittersweet time for Martin. Her beloved grandmother, Angela – her father’s mother, whom she calls her guardian angel from whom she got her middle name -- and her dad both died on Christmas Day in different years, but at the same hour – 3 a.m. in the morning. Still, the memories of Pasta Fagoli and that special connection linger on.

“I made the Pasta Fagoli for my dad and took it to his house,” she reminisces. “I still can see the way he looked at me when I handed it to him, still warm, and he asked, ‘Is this Pasta Fagoli?’  A week later, he called me – and he never called anyone – and asked if I could make it for him again. So I did. I took it to his house and the housekeeper handed me an envelope. I opened it up and there was $500 and a note that said, ‘Here, Deana, thanks for the soup and go buy yourself some more beans.”  Two weeks later, he called and asked me to make him some more and I told him that I didn’t need $500 and that beans were only $2. I brought the Pasta Fagoli over to the house and the housekeeper handed me an envelope again. In it was $500 and a note that read, ‘Thanks, honey, for the soup. Go buy yourself a house.’”

It is with great music and memories like these that Deana Martin is set to “bring the house down” at The Smith Center.