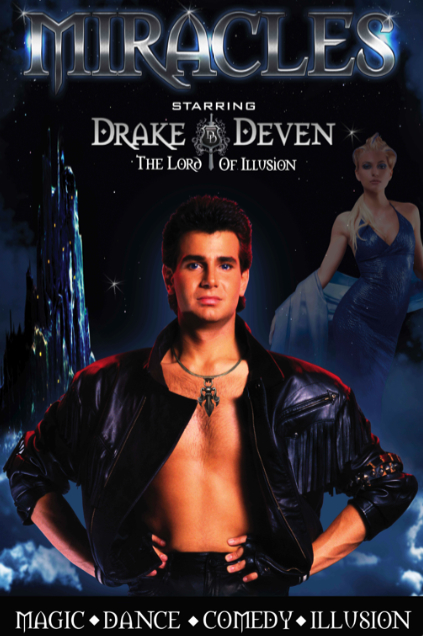 One noted illusionist’s “Flash” of inspiration is proving definitively that there IS magic in a name.

After disappearing from the scene for a while on a personal hiatus, the celebrity headliner magician/entertainer formerly known as Flash has transformed his lifelong stage name into a new one. Now known as Drake Deven – The Lord of Illusion, he has more than just a simple name change up his sleeve.

“I didn’t rebrand my stage name because I’m in the witness protection program or running from the law,” laughs Drake, a classy, mysterious, dressed-all-in-black handsome, funny man with a warm, engaging personality. “It has to do with my constant desire for self-improvement and my personal and creative urges to stay fresh and current. It’s important to evolve and keep up with the competition and changing times and the name "Drake Deven" will fit perfectly for all of my future plans.”

It was his five-year hiatus from the business to take care of his gravely ill father that proved to be a pause of reflection for Drake concerning his life and career. He says that, one day, while evaluating his future course, a feeling came over him that the moment had come to retire the stage name Flash and take on a new and fresh identity. But he smiles when he recalls how he conceived the stage name Flash and how many great things have come out of it.

“It goes all the way back to when I was in elementary school and, at the age of 9, would entertain the kids in the lunchroom with magic tricks,” Drake remembers. “One of the tricks involved making a flash of fire appear in my hand. I had a nice crowd around me but very few knew my name. So they started coming up to me and addressing me as ‘Hey, you, the one with the flash trick.’ Or they simply would call me ‘Flash.’ And that’s how the name came to be.”

So how did he come up with the name Drake Deven?

"I had a family friend who was a very famous actor/comedian and he was like an uncle to me as well as a mentor,” he explains. “His name was Alan Drake and I just always loved the name Drake. The meaning of the name Drake, which comes from ancient history, is dragon, and, growing up, the dragon was always my favorite magical creature. Plus, I always enjoyed reading about the mythical magician named Mandrake. The name Deven came from my one-time chance meeting with a legendary Hindi master magician named Divine, who told me that his name was a variant of the name Deven, which means divine. I never forgot that name. That’s how I formed the name Drake Deven.

“I’ll miss the persona I created with the name Flash,” he adds with a smile. “The Flash persona will always be with me. I will never forget all the doors that name opened and its uniqueness and the curiosity it evoked. But the world is made up of constant change and I’m looking forward to the next leg of my life’s journey with the new name of Drake Deven.”

Drake was born in Boston, Massachusetts, where his father, Maurice (who had the nickname “Lucky”), owned a very successful construction company while his mother, Naomi, was a stay-at-home housewife and mom taking care of him and  his younger sister, Tiffany. Show business was not new to the family as Drake’s dad had many famous show business friends and his mom was a dancer and loved the arts.  Drake discovered magic very early on while watching the movie Houdini starring Tony Curtis. Once Drake was hit with the magic bug, he never looked back.

By the time he was a teenager, Drake was already performing professionally on stage and on television. He was one of the youngest members of the very prestigious magic organization called the Society of American Magicians and one of the youngest performers to hit the Las Vegas stage.

Drake made his first $1 million before the age of 20 and worked with such legendary stars as Tom Jones, Sammy Davis Jr., Ted Knight, and Vic Damone, touring the country and performing in such entertainment hotspots as New York, Atlantic City and Las Vegas. He made dozens of national TV appearances.

From the mid-90s until five years ago, Drake never stopped working, even for a moment. He began the 90s floating at sea, starring in a year-long production show, then followed that with non-stop years of playing casino showrooms and performing at international corporate events. Eventually, Drake produced and starred in his own hit show that ran for years at subsequent casino venues.

“Those years were a dream come true,” he enthuses. “Everything I had ever wished for, dreamed, or imagined came to fruition, not to mention the fame and fortune that accompanied these successes.  I recall finding a piece of paper stuck in an old address book on which I had many years before listed all of my most sacred dreams. I was amazed to see that every one of those dreams I had written on that paper had been realized. The fantasy had come to life.”

It was then, sadly, that tragedy struck. While Drake admits that up until that point, his life had been an easy and wonderful ride, for which he will always be grateful, five years ago, he experienced what he calls “the true meaning of life.”

“I traveled back to Boston to be with family for a short visit, but I had only been home for a few days when my father had a stroke,” Drakes somberly relates, pain reflected in his eyes. “My mom had died some years before and I thought that my father would make a speedy recovery so I told my staff and colleagues that I might be in Boston a few extra weeks.  Unfortunately, due to many complications in his condition, weeks turned into months and months turned into years.  I, along with other family members and close friends, sat by my father’s side until he passed away.”

Drake expresses that those years were the hardest years of his life on every level and that he only wishes to thank all the other family members and his very close friends that supported and consoled him during that time. As to whether he ever felt cheated by making the decision to take those years off from his life and career, he responds with a resounding “no.”

“Definitely not,” he states. “I just feel so very lucky that I was in a personal and financial position to do so.”

Afterwards, Drake took an extra year to close out all his affairs back east and to dream about and plan the next leg of his magical journey.  In 2012, that journey brought him back to Las Vegas where he purchased a very large home that can only be described as a castle, a magical castle, one befitting the Lord of Illusion.

Since his move, Drake has been extremely busy with Magnifique Productions, producing, promoting, and presenting high profile events and celebrity entertainment.

“One of the projects that has me very excited is a partnership with a living legend, international superstar Engelbert Humperdinck,” Drake enthuses. “Engelbert, along with his manager, Scott Dorsey, has been working with my company and my producing partner and one of my best friends, Emmy Award-winning TV production designer Andy Walmsley, to produce a new multimillion-dollar mega-production show in Las Vegas starring Engelbert. This project is especially thrilling for me because I have always been an Engelbert fan.”

As for appearing in his own magic show, Drake, who performs every type of magic from large illusion to close-up magic and is known for his signature “Swords of Death” as well as for appearing in a flash of fire on stage, revealed that, during his absence, he wrote a new show entitled “MIRACLES.” (see poster above). Several properties in Las Vegas have already made him offers for  the show to become a resident show in Las Vegas. As a result, he hopes to be in pre-production in early 2014.

With a new name and a new beginning here in Las Vegas, Drake is looking forward to old friends and new taking this magical journey with him as he once again follows his dreams with the new name Drake Deven.

After all, one of the most important principles of magic is transformation.