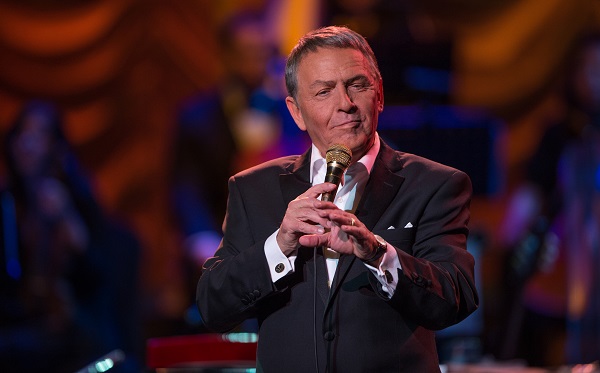 But, hold the therapy -- it all just goes to show how talented the signing impressionist is as he comes out “swinging” with his right-on impersonation of the man known as “The Chairman of the Board,” the legendary Frank Sinatra, in the Palazzo Theater at The Palazzo. With it, Anderson, who previously was a longtime Las Vegas staple in the entertainment arena, is finding once again that Las Vegas is his kind of town.

“I never met an entertainer in my life who didn’t respect Frank Sinatra and think that he was the best,” Anderson, who performs as the music icon in full prosthetics and makeup, says. “This show gives people a taste of what Vegas was like back when great stars like Sinatra, Dean Martin, Sammy Davis Jr., Elvis Presley, Tony Bennett, Tom Jones, and Engelbert Humperdinck were in every major showroom on the Strip. It’s a chance for the younger generation to leave their high-tech gadgets and step back into another time period and see something they never saw before. The Palazzo is hallowed ground – it is owned by Sands, Inc. and the Sands is where Sinatra and the Rat Pack made their mark.

“’Frank—The Man, The Music’ is all about Sinatra’s music and the three phases of his career – live performance, TV shows and movies, and the recording studio,” he continues. “He recorded 1,200 songs during his career. He spent most of his life in the studio. I tell a few stories, reminisce about Sinatra’s career and I may even have a little Jack Daniels. The set is evocative of the great old supper club showrooms of the past and the environment adds theatricality. This show is different than anything that’s on the Las Vegas Strip today – or anywhere in the country, for that matter.”

Anderson never breaks his uncanny stride during his performance, either in Sinatra’s speaking or singing voice or in the icon’s mannerisms and other characteristics. The awesome impersonation is made complete by the addition of Vincent Falcone, who was Sinatra’s musical conductor for 10 years in both live performance and on albums and who conducts the 32-piece orchestra for Anderson, half of which actually played with Sinatra. One of those musicians is Joe Lano, who was Sinatra’s favorite guitar player for years and who soloes with Anderson on “Meditation” and “The Girl From Ipanema? from Sinatra’s album of Antonio Carlos Jobim songs.

“I have dedicated my career to Siuatra’s music,” Falcone acknowledges. “Bob is as close as you come. I’ve never heard other impersonators understand Sinatra’s music the way that Bob does – how to phrase, how to get it across to an audience – let alone stay in character for an hour and 20 minutes.”

“I first came to Las Vegas in 1970 and got a job playing piano in the lounge at the Thunderbird,” he continues. “My dream was to become the pianist at Caesars Palace. Then, later, after playing for the “Casino de Paree” show for three years, I got the call asking me to be the pianist for Caesars Palace. The first artist I worked with was Frank Sinatra. Then, when Frank decided that he wanted to become more contemporary, he started taking me on the road. One day, I got a call from his manager asking me if I would conduct for Frank at Radio City Music Hall – he threw me right into the fire. Frank and I were like father and son and he was great to me, my mom and dad, and my children. He was an intellect who had no patience for stupidity or disrespect and he was most generous to those who needed help.”

In the show, which was two-and-a-half years in the making, Anderson performs 21 songs that include some of Sinatra’s classics, personal favorites, and some of the more obscure songs that the legend liked to sing. And with 1,200 songs to choose from, songs will change during the show’s run. Despite the steps that he has taken to perfect his Sinatra impersonation, Anderson still feels that he hasn’t perfected his voice – although if you close your eyes and just listen –even ignoring the amazing right-on makeup and physical persona, you would swear that Sinatra himself was up on that stage.

“This is the most difficult impression I’ve ever done in my life,” Anderson admits. “Frank’s voice is right down the middle – there is nothing to grab onto. I never do an impression by rote – I change it all the time. To get Frank down, I had movie screens and 25 different videos and I put up mirrors all over the room. For two years, I got up at 6 a.m., combed my hair back, and put on his different videos. In reality, I had been studying him since I was 12 years old.

“Frank Sinatra would not be who he became if he hadn’t surrounded himself with great conductors and arrangers like Vinnie, Nelson Riddle, Billy May, Gordon Jenkins, and others,” he adds. “He had a lot of support.”

Anderson admits that doing this show five nights a week, Tuesday through Saturday, with two hours needed to put on his makeup each night, is the most daunting task he has ever taken on. But it is one that he is very much up to, having waited some 20 years to have his own show in a major showroom in a prime Strip hotel. The show’s producer, Steve Eich, gave him the best advice, telling him to just go out and do it – to be Frank and take it on. Eich who has known Anderson a long time, expresses that the entertainer’s voice has grown and matured to the perfect spot to do this.

What’s interesting – and ironic -- about Anderson’s career is that it all started with Frank’s daughter, Nancy Sinatra.

“It was back in 1973 and Nancy was performing at the Sahara,” Anderson recalls. “I stumbled into the hotel and walked into the showroom. She was opening in four hours and she didn’t have an opening act because the Everly Brothers, who were supposed to open for her, had a fight and walked out. I was unshaven, dressed in shorts and a T-shirt and wearing a peace sign – I was a Vietnam vet.

“I sat down with columnist Mark Tan and when I found out about the Everly Brothers, I told him that I could do whatever Nancy needed and he relayed that to her. I think she let me do it because her conductor, who had conducted for her father and arranged for Elvis, said to her, ‘Give him a mic; this could be fun.’ I think he said that because of how I was dressed. But I got up and sang and got the gig as her opening act.”

From Nancy to Frank, the humble Anderson is hoping that now things have finally come full circle, he can shoot straight for the top. Watching him perform, one knows he means it when he sings “Fly Me To The Moon.”