Patrick and Matilda: She's Far From Putty in His Hands 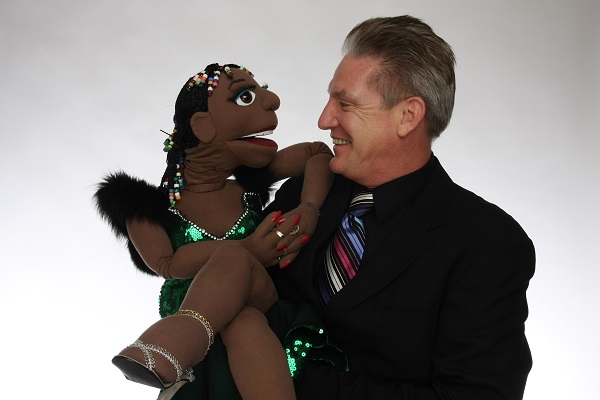 When it comes to male/female relationships, it could be said that Patrick Murray has the world on a string.

That’s because the ventriloquist/puppeteer/humorist took on a real dummy as a female partner long ago and he’s been putting words in her mouth ever since – and without even moving his lips. Luckily, they are very funny words as audiences in the D showroom will witness in “Ja-Makin;-Me Laugh” every afternoon at 2:30 p.m.

Yes, Murray is one of those lucky guys who gets to put his money where his mouth is as he espouses, through his outrageous Jamaican puppet cohort, Matilda, her views on everything from prescription drug commercials to modern technology, men, and her being a fish out of water, having moved from Jamaica to America. Besides his clever humor, you’ll see Murray doing some things you’ve never seen a ventriloquist do before, including emulating a woman’s voice for 70 minutes, complete with a Jamaican accent, and shooting off rapid-fire rants in Spanish in that voice for a few hilarious minutes at one point in the show, which is one of Murray’s trademarks.

“Those things came about naturally,” Murray explains. “Matilda and I are a traditional comedy team. I do the set-ups and she does the punch lines. We also talk about Las Vegas, gambling, the hotels, Fremont Street, and tourist attractions. I always strive to be a bit different – I’m not trying to be like anybody else who does what I do.

“Matilda is such a strong character,” he adds. “As for how she was born, there is a 93-year-old woman named Verna Finly who was well-known in the puppet community as the premiere soft-sculpture puppet maker – what you would call a Muppet-style character made from foam rubber instead of wood. I had a contract to perform in the Caribbean and I was encouraged to come up with a West Indian character. I thought that a female, as opposed to a male, would add more contrast. So I called Verna on the phone and she asked me what I was looking for. I told her to use her intuition. Matilda came by UPS with her hair all beaded and cornrowed, That was 28 years ago in 1987. Matilda’s getting older but she still looks the same.”

Murray’s progression of characters in his professional career started out with a wooden boy puppet that he named Rusty Riley, which was patterned after the famed Paul Winchell’s puppet, Jerry Mahoney. Rusty had a cousin named Rufus Riley, a buck-toothed, cross-eyed country guy, and an uncle named Ricky Riley, an old bald-headed drunken guy. Murray was using all three characters in his show when he first incorporated Matilda. As she became a stronger and stronger part of the show, he ended up dropping the other characters.

“Doing a female voice depends upon one’s own vocal range and mine includes the ability to do a high-pitched voice,” Murray comments. “And I got the Jamaican accent down because I had so many West Indian friends and I’m a pretty good mimic. I started out by just joking with the guys using that accent. They told me to get a Jamaican dummy.

“Matilda is very outspoken, quick-witted, and sassy,” he continues. “She was loosely based on a woman I worked with in Jamaica who was beautiful, elegant, and larger than life but who told it like it was. I write my own material – I figure out what bugs people and what they can relate to, the everyday struggles we all go through. Matilda observes things from a female perspective. I don’t know how I get it – I listen to my wife’s feelings about things and then I make it so that the woman comes out on top because if the females in the audience laugh, the men do, too. And I practice doing Matilda’s voice every day for one-and-a-half hours. My show at the D is specific to Las Vegas. I change my entire show 20-30 percent every year.”

Matilda, believe it or not, also changes her clothes. She has all kinds of different garments, including dresses, gowns, and a beach outfit, all exclusively designed for her by a few different people, including the woman who took over making puppets from Verna Finly.

As for the great man behind this unique woman, Murray, who was actually a late starter in ventriloquism, grew up in Chicago. Although he had an early interest in the genre, and his mother even bought him a dummy named Danny O’Day (which was a character used by ventriloquist Jimmy Nelson, who had a TV show and also did Nestle’s commercials), he didn’t carry through with it. Danny was stuffed away in a toy box until Murray was 23 and a dockworker in Chicago unloading freight trains and tractor-trailers.

“I took Danny O’Day out of the toy box and pulled his head off so that a dentist friend of mine could rig him up to drink a bottle of beer at our dockworker’s Christmas party,” Murray recalls. “I then did a show at the party and the guys encouraged me to get off the docks and use my talent. In Chicago, there is a place called Izzy Rizzy’s House of Tricks that had a school of ventriloquism. The guy was out of town so I bought the $4 Izzy Rizzy Home Study Course, which was a 42-page booklet written more for a 12-year-old. I worked from midnight to 8 a.m. on the docks and played pranks all night, making voices come out of the freight cars. Three weeks later, the guy returned. He took me in for professional lessons and gave me a professional dummy, Rusty Riley.”

When he was not working on the docks, Murray began performing on weekends in a nightclub called Little Bit of Magic, in which the Izzy Rizzy guy was a partner He then began working the Chicago comedy club circuit, earning stage time but no money. Once he realized that he could make a living at ventriloquism, he got a gig at the Sabre Room in Chicago, where he performed four nights a week for a few years in a Las Vegas-style revue. In 1982, he started to tour, going to such places as Atlantic City and the Caribbean. He even lived in the Bahamas for two years.

Now Patrick Murray and Matilda are happily ensconced in downtown Las Vegas where audiences will laugh heartily as they learn to expect the unexpected. After all, Murray may be pulling the strings, but then, Matilda is no ordinary dummy.