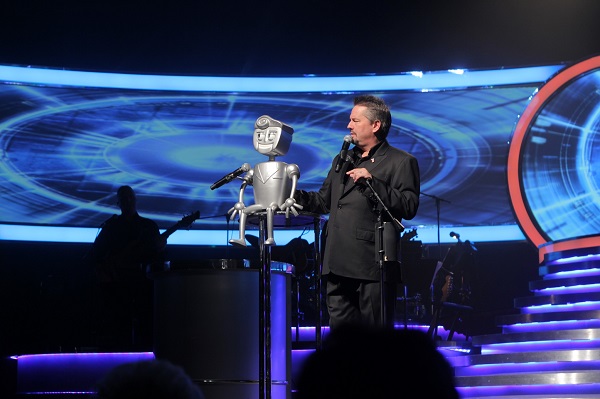 What do you do when your right-hand puppet decides to leave the spotlight of your show to try to forge, uh burrow, his way into the bright glow of Hollywood?

You look for another hand-y man to take his place.

Meet Rusty The Robot, the newest member of acclaimed ventriloquist/impressionist Terry Fator’s entourage of singing characters in his hilarious show, all of whom are looking to pull some strings and take over the top spot from Winston the Impersonating Turtle. The Mirage’s new prototype robot, which was introduced on Fator’s sixth anniversary at the hotel, Rusty is designed to do the job of all employees. And, no, he doesn’t just do heavy metal tunes. He is able to sing virtually any song in any voice, from the Tin Man and Elvis to Bruno Mars and Garth Brooks.

As for Winston, who is the premier authority on the fact that it’s not easy being green, he makes no bones about the fact that, despite his colorful persona, he just doesn’t rake in the big bills in Fator’s show. That, of course, forces the irascible amphibian to come out of his shell and leave Vegas to try his flipper at becoming a movie star, which is the premise of Fator’s newest hilarious show. And even when Winston has a little frog in his throat – that would be Kermit, thank you very much – when he opens his mouth, he knows he’s doing much more than just catching flies.

“Winston truly believes that he won America’s Got Talent for me,” sighs Fator, who, after championing the 2007 TV competition, landed a 10-year contract with the Mirage. “He and I both know that and I have no delusions about it. Actually, when I was competing on the show, my sister kept badgering me to put dark glasses and a black wig on Winston and do Roy Orbison’s voice. I did it because I felt I had the potential to win – especially because I was doing Roy Orbison with my mouth closed. While the other contestants were at the beach, I’d be in my room practicing 8-10 hours a day.

“Before America’s Got Talent, I had been performing at fairs, festivals and elementary schools,” he recalls. “I would do a duet between Kermit and Louis Armstrong singing ‘It’s a Wonderful World.’ I thought it could get me to the next level so I contacted the Muppets to ask if I could use a Kermit puppet and they told me no, nobody does Kermit; he is one puppet, one voice. So I thought, what if I had another amphibian that could do an impression of Kermit? I called the Muppets back and they said that I could do that as long as the puppet didn’t look too much like Kermit. And Winston was born.”

In watching Fator’s extremely humorous and clever show, which incorporates side-splitting videos and still photos, the thing about his puppet family is that you really begin to believe that they are real entities separate and apart from Fator. And that’s just the way he intends it to be.

“I feel like they are real characters and I have spent hours manipulating them and putting them into real situations, such as Winston’s not making enough money in the show,” Fator explains. “I have to make them real to the audience by giving each puppet a reason to be there and having people envision each one doing something else outside of the show -- I don’t want to be up there just telling jokes. When I can create a mental image of a puppet in people’s minds, it becomes a real character to them.”

With it all, Fator is an anomaly. Although he fully expected after he won America’s Got Talent that other ventriloquist/impressionists would pop up, none have shown up to date. And don’t expect to see one anytime soon.

“My voice doctor, who handles the world’s top singers, says that what I do is physically impossible,” Fator reveals. “He admits that he doesn’t understand how I do it.”

It all began when, as a child, Fator started imitating singers such as Michael Jackson, the Osmonds and Frankie Valli. On Valentine’s Day 1975, he was looking for a book in the school library so that he could write a Valentine’s Day report and accidentally overshot it, coming across a book on ventriloquism. That day changed his life – he began doing ventriloquism at the age of 10 and got his first puppet at 12, a lion puppet he named Jackal Michson that sang Michael Jackson songs.

“When I was 12, I told my family that I was going to start carrying my puppet around and I brought it to the dinner table so that I could learn to relate to it,” Fator laughs. “I’d have the puppet say, ‘Please pass the potatoes.’ My brother and sister would roll their eyes but my mom related to it and actually made a plate of food for him. She also called him a figure and not a dummy. I spent a lot of time studying and watching people and noticed that when people turned their heads to the left or right, their eyes followed. So my second puppet had eyes that moved back and forth.

“My mom saved for three years and then contacted one of the top ventriloquist puppet- makers in the country,” he continues. “He had an original figure just sitting in his office that had never been used by anyone and he offered to sell it to her for $1,000. When she told him that she only had $500, he sold it to her for that price. She gave it to me for my 18th birthday. That puppet became Walter T. Airedale, the cowboy country singer, and is in my show today. He has had to be refurbished a couple of times but he is well-oiled and up to date. He is my sentimental favorite puppet while Winston is my signature puppet and actual favorite.”

Though he started performing professionally at about 19, joining a band and doing celebrity voices through ventriloquism with a heavy metal puppet, in reality, Fator had no childhood. His father was emotionally and physically abusive and from the time he was 8 years old, Fator, along with his brother and sister, was forced to work as a janitor in the family’s janitorial business before school and after school until midnight. The siblings worked year-round fulltime, never having weekends or any summers off.

“I would spend countless hours practicing ventriloquism while doing my janitorial work,” Fator relates. “I had a radio with headphones and I would sing along with the songs with my lips closed. After spending 10-15 years as a janitor, I ached not to be one.”

Today, Fator has turned his talent into one of Las Vegas’ most successful permanent shows with his own “family” cast of characters. Besides Winston, Walter T. Airedale, and Rusty, there us, Duggie Scott Walker, the “burner” we all knew in high school; Wrex, the crash test dummy; Julius, the cool-cat soul singer; Emma, who recreates the great singers like Etta James; Maynard, the world’s greatest Elvis impersonator, and Vikki, the cougar; Then, of course, there is the Lady Gaga character, who is a real-life full-sized man chosen from the audience at random that ends up in a hilarious routine with Fator. In addition, assisting Fator on stage is beautiful Taylor Makakoe, to whom Fator is currently getting divorced but who will remain in the show. There is also a live band.

Fator creates each puppet and its look, an artist conceptualizes what Fator tells him, then a puppet-maker makes the character. Fator has no idea of the voice or personality until he has the puppet in hand and works with it – those aspects, like the name, come with the feel. All his puppets go through incarnations and evolve, except for Winston who was instantaneous. Fator is constantly updating his show and admits that it’s much more challenging to work clean and be funny than to put dirty jokes in his act. He emphasizes that his is a family show, with children 5 and older being able to attend.

“When I first started in Las Vegas, I was involved with a lot of advisors who convinced me that I wasn’t capable of putting together a show on my own, that I didn’t understand the Vegas market,” he acknowledges. “So I had minimal input. About a year to 18 months into it, I began to get frustrated. I was a puppet of other people. So I began to assert myself. I wanted the show to be my own vision – my name was on the billboard, my name was on the theater. I went out and found my own writers and I rewrote the show. With each incarnation, I write almost all of it; all the major ideas are mine.”