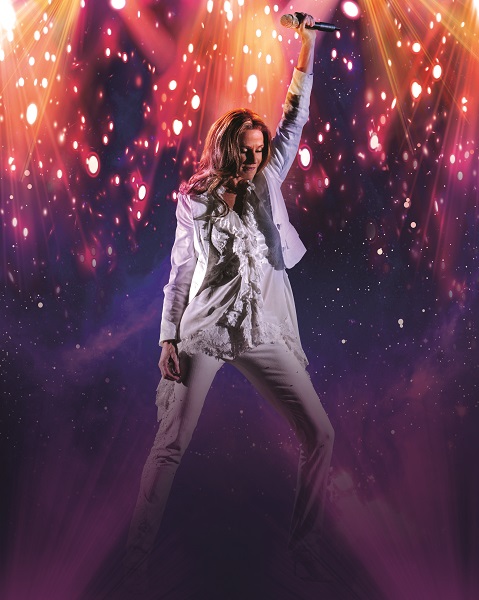 It has often been said that you can’t possibly know what it’s like to be someone else unless you are living in that person’s shoes.

As a performer in "Legends in Concert" at Harrah’s, Elisa Furr spends a good part of each day not only living in Celine Dion’s shoes, but also in her clothes, hair, voice, mannerisms, and overall personas. If imitation is the sincerest form of flattery, then Furr is as close to the real thing as one can get since she looks and sounds amazingly like the legendary star she is emulating.

“I’ve gotten to where I can feel like Celine,” she explains. “I envision her in my mind when I’m performing. I put myself in her shoes. In 2005, I was singing in Napoleon’s Lounge at Bally’s and when I did a Celine song, the bar would get very quiet and, afterwards, people would tell me that I sounded a lot like her. The idea to impersonate her came when I was pregnant with my first child and unable to perform. I had an epiphany.

“I am a producer and I have my own recording studio,” Furr continues. “I’ve written music for thousands of TV shows and lots of movies. A song I co-wrote was on The Simpsons and songs I’ve written have been on such shows as Barbara Walters, Bernic Mac, The Osbornes, Entertainment Tonight and MTV shows. I play keyboards and arrange all instruments myself. I like to think of myself as a musician. I went into my recording studio and learned Celine songs, recording a line at a time to a karaoke track. When I finished, I went back and found the lines that sounded like her. I took the best of each line and put them all together. I then had a recording of each song.”

To further explain how she learned to sing the song and sound like Celine, Furr had a mimic track on a template. There was a track of Celine singing, underneath which there was a karaoke track, and underneath that was a track on which Furr could record. She would mute one track while working on the other.

“It’s taken me nine years to get to where I feel comfortable on stage,” she admits. “I sing more like Celine and feel more confident that I’m representing her well now. She is the opposite of everything I am. I’m curvy; she is petite. I’m an R&B dancer; she’s a mover. I had to change everything about my performance to match hers.”

Though she has a nine-year-old son and is engaged in real life, Furr, who started singing at age 14 in Little Rock, Arkansas, where she hails from and moved to Las Vegas in 2001 after spending five years in Los Angeles, admits that she is married to her job. She does 11 shows a week in "Legends" and vocalizes every day, making sure that she drinks a lot of water daily.

“The hardest part is putting all the facets of Celine together,” Furr reveals. “Where her vocals are concerned, I have to figure out the exact movement to do while hitting the high notes. The placement of those notes in her voice makes it very hard to stay on pitch and the specific moves while doing it are the hardest thing. I think I represent her very seriously. I take the quirkiness that she has and her specialness and simulate them without going too far.”

Furr sings five songs in the show – “I’m Alive,” “Taking Chances, “I Drove All Night,” “Power of Love,” and, of course, “My Heart Goes On.” When she is not performing in "Legends," she tours the world doing 90 minutes of Celine in concert. When it comes to Celine’s costumes, Furr hires various costume designers to recreate the diva’s outfits.

What is the best thing to her about performing as Celine?

“I’m so happy to be able to move people and bring them to tears,” she responds. “I think Celine has given me a chance to be able to do that.”

It’s obvious that the shoes fit and Furr’s wearing them – perfectly.