Deana Martin: Playing Among the Stars 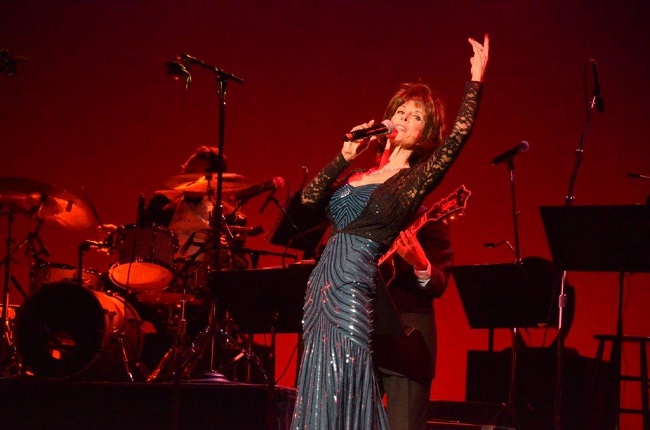 Last year, Deana Martin, daughter of beloved late entertainment icon Dean Martin, embarked on a musical journey called Destination Moon. Now she’s getting ready to “rock it” into the casino atmosphere in a unique way, this time her intent being to “swing” on a star.

Martin reveals that her new show, “Deana’s Martin’s Big Band Swing Show,” which she will be bringing to the South Point May 28, 30 and 31, is a whole different show for her. With Charlie Calello doing her Big Band arrangements as always and her 18-piece band with conductor/arranger Rick Krive, who has played on all her albums, accompanying her, Martin will still be delighting audiences with the music and memories of her famous father and his renowned friends, complete with home movies, videos, and stories. However, in addition to the great songs that they made famous, some of which she sings on her latest CD, “Destination Moon,” she will also be performing some tunes from an album that she is currently recording that includes “Mr. Sandman,” “Digga Digga Do,” “Georgia on My Mind,” “Spooky,” and “Sea Cruise.”

“The timeless classics can be interpreted in so many different ways,” Martin notes. “They can be modernized to sound fresh, young, and new. They were written by geniuses and it’s a thrill to sing them and there is nothing better than to be able to sing this music with fabulous musicians and great arrangements,

“On Destination Moon, I also recorded ‘Break It To Me Gently,’” she continues. “I’ll never forget the first time I heard it. As for the new tunes I’m recording, I heard Dusty Springfield sing ‘Spooky’ and thought that it was just too cool. And I’ve always wanted to sing ‘Georgia On My Mind’ ever since the first time I heard Dad sing it.”

Martin, who appears at all types of venues, performed some of the new songs for the first time on May 3 in L.A. at Herb Alpert’s Vibrato Jazz Club, which she calls a cool place that she has played a few times before. Still, having recently returned from a tour of Australia during which she performed at performing arts centers, she marvels at the appeal the timeless classics and her father’s persona has with crowds of all ages and demographics.

“It blew me away,” she candidly admits. “You would have thought that Dean Martin was alive and well. The audience loved the music and the humor in my show. It was so fabulous for me. People told me afterwards that they loved my dad and were big fans of his and that now, with my show, things have come full circle. The stories about him and his friends like Uncle Frank, Sammy Davis Jr., Judy Garland, and Peggy Lee bring back memories and make new memories for people.

“There were a lot of 18- to 20-year-olds there,” she adds. “It really lifted my spirits to see all those young people. I see it all the time wherever I perform. When I go out after the shows, they tell me, ‘I miss this kind of show,’ and ‘I love this music.’ One freshman at the University of Illinois told me, ‘You made my freshman year.’ Others have commented on the great music, the jokes, and the beautiful dresses I wear. I think there is hope – the more publicity these kinds of shows get, the better.”

As for Martin, she expresses that this kind of music and show is simply in her DNA. She grew up hearing music from the Great American Songbook being played constantly in her house and says that Dinah Washington, Ella Fitzgerald, the Mills Brothers, and Bobby Darin were among the artists that her dad loved.

“My mind was permeated with this kind of music,” she says. “So when I decided to sing, it was all there. All those people were right in my living room. I remember doing the twist with Marilyn Monroe while Bobby Darin sang ‘Up a Lazy River’ in our Beverly Hills home at 601 Mountain Drive. And Sammy would sit at the piano and everyone would sing parodies. It would be a party.”

Martin remembers the likes of Tony Bennett, Andy Williams, Judy Garland, Rosemary Clooney, Sammy Cahn, Lucille Ball and Desi Arnaz, Peggy Lee, and, of course, Frank Sinatra being frequent visitors to the house. She says that to watch them perform on her father’s TV show was amazing.

“My dad wasn’t intimidated singing with anyone, “she acknowledges. “He had Engelbert Humperdinck, Ella Fitzgerald, and Jack Jones on his shows. Everyone wanted to be on his show – it was the ease with which he did everything. He knew how to make people feel good. He sang with ease, too. The notes just poured out of him.

“He’s with me all the time,” she reveals. “I truly feel him with me. I feel him on stage – I almost become him when I’m performing. He gave me six great pointers in life – treat everyone the way you want to be treated; arrive early; know the lyrics; stand on your mark; sing from your heart, and when you leave, leave people happy. My dad was very disciplined.”

Martin describes her father as being “very sweet, kind, funny and tender.” She relates that he hugged and kissed her and her six siblings a lot and that she can remember the smell of his cologne, Wood Hue by Faberge.

“When he .hugged me, I could smell it,” she reminisces. “When he passed away on Christmas Day 1995, I got a bottle from his bathroom. I still have a little left. My fondest memories are going to his house and watching TV with him and making him Pasta Fusilli and bringing it to him. His eyes would light up – I miss that look in his eye.”

When that spotlight hits Martin’s eye and thoughts of her father float by, that’s amore. For both performer and audience, memories are made of this.