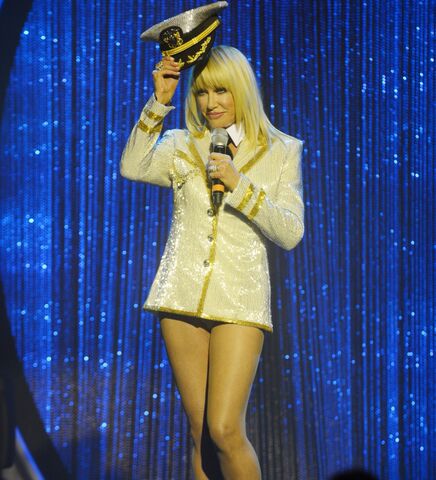 She’s pretty; she’s sexy, and she has a great personality.

You bet – and with heat. More to the point, “Suzanne Sizzles,” as anyone in the proximity of the Westgate will attest to. That would be the multi-talented Suzanne Somers, who opened her initial 28-week residency (through May 2016) in the intimate Suzanne’s, the former Shimmer Cabaret, at the hotel on May 23rd. She came, she thawed, she conquered with her return to Las Vegas after 25 years with her one-woman cabaret show that displays her vocal talents, sense of humor, sense of fashion, and her beautiful toned legs, most recently seen on Dancing With The Stars, and brings back the personal feel of the golden days of this city that everyone has always loved and so many miss, Make no mistake out it, when it comes to setting the stage on true Vegas fire, Somers has no match.

If you can take the heat, you might also want to get into the kitchen because the Westgate is opening the Suzanne Somers Organic Spa Café, serving food based on recipes from her series of bestselling cookbooks, in the Suzanne Somers Spa featuring all of Somers’ SUZANNE Organics Cosmetics, organic skin care, and organic hair care products.

“For a couple of years in the ‘80s, I was in the main showroom in what was then called the Las Vegas Hilton,” the 68-year-old entertainer relates. ”When I met with David Siegel, who owns the Westgate Las Vegas Resort & Casino, he wanted me to go into the big room. I told him that at this place in my life, I really wanted to do a very personal and intimate show rather than a major production and that the room I'm in needed some technical changes that David and Mark Waltrip, his chief operating officer, agreed to do. It has now become one of the most beautiful cabarets in Las Vegas and I love performing there five nights a week.”

Backed by her five-piece band and evoking the spirit of the heyday of the Rat Pack and the Great American Songbook, Somers takes audiences through her own personal journey in show business accompanied by video and stills on large screens on either side of the stage. It’s a journey that began with her earning $136.72 as the mysterious blonde in a white Thunderbird mouthing the words “I Love You” to a young, unknown Richard Dreyfuss in the 1973 classic film American Graffiti,

Serendipitously, that led to her first appearance on “The Tonight Show” starring Johnny Carson. Scraping together $25 for transportation to L.A. for an audition for a segment on the show called “Lots of Luck” with Dom DeLuise, she was sitting in the NBC commissary when Carson approached her with his producer Fred de Cordova and asked her what she was doing there. Somers explained that she had a callback and gave them copies of a poetry book she had written called Touch Me, the back flap of which touted her credit in American Graffiti.

Three days later, Carson brought her on the show and introduced her to his TV-viewing audiences as the mysterious blonde in the Thunderbird. After that, Carson had her read her poetry on the show once a month and Somers’ book became the bestselling poetry book of that year, along with Rod McKuen’s. Her appearances were also the catalyst for her getting the role of what turned out to be a long-running hit sitcom, Three’s Company.

“I don't believe in luck,” Somers says. “I believe if you put yourself in the right place at the right time, you might get lucky. Johnny Carson putting me on his show regularly as a poet and being seen by and cast as Chrissy Snow by the president of ABC was the turning point of my life and career. I hope Chrissy will always be a part of me. She brought America big laughs and happiness and she was the most fun I have ever had playing a character.”

Somers laughs when she talks about the fact that the ditsy blonde role also gave her the dubious distinction of being called “the dumbest woman in America” by Time Magazine. But it didn’t take long for the public to realize that there was much more to Somers than met the eye, as she began to achieve her immense success as a trusted health advocate. To date, she has written 25 books, including five #1 New York Times Bestsellers and there are currently more than 25 million copies of her books in print. Her last book, I’m Too Young for This!: The Natural Hormone Solution to Enjoy Menopause was an instant New York Times bestseller. She also received an Emmy nomination as Outstanding Host for The SUZANNE Show, her weekly series of one-hour health specials on Lifetime

Although she had been a frequent headliner in the city, Somers left Las Vegas in 1990 to write 13 of those New York Times bestsellers, star on ABC-TV’s Step By Step for seven years, develop a highly successful and extensive branded product line, and lecture on “A New Way To Age” in the U.S., Western Europe, and Canada.

Her latest book, TOX-SICK: From Toxic to Not Sick, an exposé on the immediate and long-term dangers of living in a world that has become increasingly toxic to our health, was published by Harmony Books in April 2015. In tandem with that, Somers has even designed her own dressing room at the Westgate, creating one that is hypoallergenic and green.

“When I was diagnosed with breast cancer 15 years ago, I turned down chemo and the harsh drugs and decided there was another way,” she expresses, talking about her foray into the natural health field. “I found that way and it's very simple. I built my immune system so my body could fight off any lingering cancer after my lumpectomy, rather than degrading it with chemotherapy. My book Knockout explains what I did and what I do today. My greatest professional achievement is being able to help improve the health and lifestyle of my readers and those who attend my lectures.”

Somers explains that her celebrity allows her to get to and interview the most brilliant medical minds and pass along this invaluable information to her readers. With it all, she has grown a lot over the years in the personal sense. .

“I am autodidactic and love to explore the human condition, especially my own,” she admits. “I continue to change priorities and my best asset is one that can only be acquired with age and that's Wisdom. I believe in many ways, I am a wise person.

“All of us are continually being tested in life,” she continues. “We can either learn and obviate the issues or crater and hide under the bed. I grew up in a very dark little house with an abusive alcoholic, my father, who stalked us nightly while we all hid and slept in a closet. I learned very early how to get through the really tough times.”

Those very painful days are detailed in one of Somers’ early books, Keeping Secrets. She says that she has been able to let go of the past and not let it define her because she is the product of a lot of therapy.

“I suggest it for anyone with issues,” she maintains.

As for how she sees herself as a person, Somers acknowledges that her best and worst characteristics are the same --.she is overly sensitive and reactive to people's feelings. What five words does she feel describe her? ‘I-am-a-fun-person,” she responds.

Still, what she considers her greatest personal achievement is having a “cool” 48-year relationship with her husband, Alan Hamill, and combining their families to the point where they are One.

“We had a very rough 10 years,” she reveals, discussing what has made their union last. “But we were committed and knew that working things out would bring us great joy and a great family, so we stuck it out and it worked.

“Alan always says it was great sex,” she adds, smiling.

After all is said and done, would she change anything about her life?

“Everything good and bad in my life has created who I am,” she sums up. “And I am happy with who I am .My greatest wish now is to live indefinitely with my brain and good bones and a slew of great-great-great-great-grandchildren.”

And to keep “cooking” for them and audiences at the Westgate.