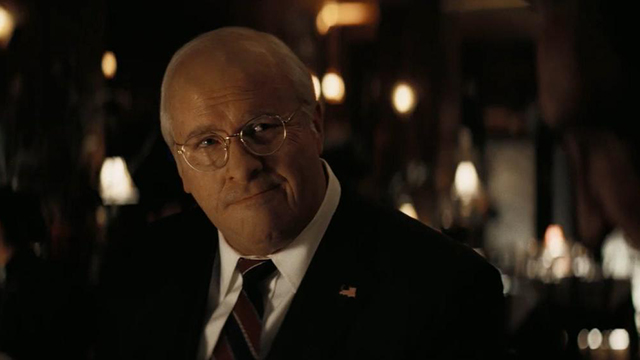 Writer/director Adam McKay's previous film was 2016's The Big Short, which focused on the 2008 banking crisis. It featured a stellar cast including Christian Bale and Steve Carell who once again reunite with the filmmaker for the biopic, Vice, which chronicles the rise of former political heavy hitter, Dick Cheney. The film's title could not be more fitting, since both definitions of Vice come into play - Cheney's government position, as well as moral depravity, corruption, wickedness.

Undoubtedly, the best thing about Vice is the stunning, spot on performance of Christian Bale in the lead role of the former Vice President. Under superb makeup and prosthetics, the forty four year old chameleon actor completely transformed into Cheney, by gaining 40 lbs. and inhabiting his persona, speech patterns and mannerisms to a T. It is a sure bet his amazing portrayal will garner Bale a worthy Oscar nomination, if not a win.

Vice follows the life of Cheney, who, with the push and encouragement of his ambitious wife Lynne (a terrific Amy Adams) rose from a near-do-well boozer with a DUI, to Vice President under George W. Bush (played as a clueless, buffoon by Sam Rockwell). Cheney is depicted as a power hungry man who used manipulation and scheming to work his way up the political ranks through several administrations to secure a powerful position in government. The clever Cheney took advantage of Bush's ignorance by implementing the Unitary Executive Theory, an interpretation of the Constitution, that gives the president near-limitless power, and allowed him, as Vice President, to essentially take control and run the government, as he saw fit.

Told in flashbacks, Vice is a biting expose of a ruthless, corrupt individual who would do anything to achieve his goal. Some have labeled the film a satire or black comedy. That's not the way I see it. Rather, to me, Vice comes off as an insightful, serious, cautionary tale about the horrific abuse of power by one man, that, to this day, has left repercussions, an indelible mark on America, and changed the course of history.