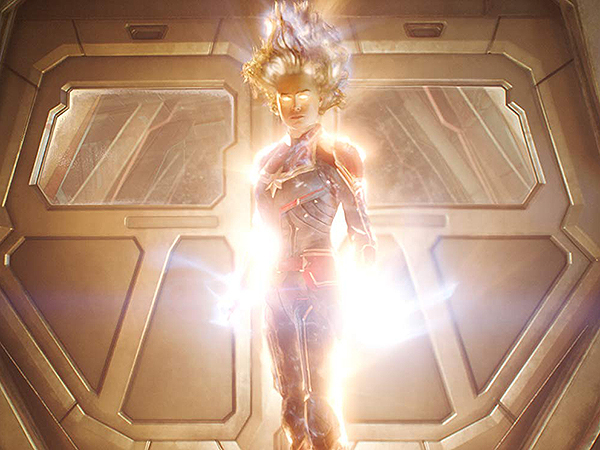 Captain Marvel is the 21st film in the Marvel cinematic universe. It is the first centered on a female superhero, as well as the first Marvel film directed by a woman, Anna Boden (who co-directs with Ryan Fleck, her collaborator on the indie flicks, Half Nelson, Sugar, Mississippi Grind).

Set in 1995, Captain Marvel is also an origin story and a prequel to The Avengers franchise.

Oscar winner Brie Larson (Room) stars as amnesia plagued Vers (pronounced Veers), an inhabitant of the Kree home planet of Hala and member of Star Force, an elite team of noble warriors. Vers' team leader and her mentor/trainer is Yon-Rogg (a fierce, take charge Jude Law) a powerful, male authority figure who warns Vers, who possesses superhuman abilities, that nothing is more dangerous for a warrior than emotion and she needs to keep her emotions under control. In other words, what he is actually saying is that he wants her to act more like a man or a machine. Really, now? I don't think so.

Let me not digress. The Kree are fighting a war with the much feared alien race of shape shifting, green skinned beings called the Skrull led by Commander Talos (Ben Mendelsohn), whom, we are told, are looking to invade and take over the galaxy and, therefore, must be stopped.

When a mission to find a Kree spy goes awry, Vers winds up hurling though space and crash landing through the roof of a Blockbuster video store on Earth (a planet the ET's refer to as C-5). Soon she comes in contact and forms an alliance with Special Agent Nick Fury (a seamless, digitally altered, made to look 25 years younger, Samuel L. Jackson, sans eye patch and with a full head of hair). Later in the film, we find out how Fury lost one of his eyes. In the meantime, while buddying up with our super heroine, he gets to enjoy some very funny back and forth banter.

Without giving away spoilers, I will just say there are plot twists and turns, in which lies, betrayals and revelations come into play, as Vers struggles to discover her true identity as Carol Danvers, an Air Force test flight pilot that disappeared after her plane crashed six years earlier and killed the women she looked up to and admired, scientist Wendy Lawson (Annette Bening, who also appears as the personification of the Kree's Supreme Intelligence). Through occasional flashbacks that pop up as bits, pieces and moments of memories from her past, along with photo evidence of her life on earth, Vers eventually finds herself, her true purpose, as well as the extraordinary strength and girl power she possesses both within and without.

I was unsure whether Brie Larson was the right choice to play Captain Marvel, but she is terrific in the role. Without a doubt she “has the right stuff”, more than aptly filling the shoes and persona of the super heroine. Disregard the naysayers who complain that the actress comes off with little emotion. Not true. Her tone is real, charming, and where required, understandably quiet and introspective, as well as funny, smart, strong and powerful as the experiences of her character unfold. Never overplayed, or sexualized, Larson gives an authentic performance that is both kick ass and a perfect role model for young females.

Rounding out the fine supporting cast of players in smaller roles are Clark Gregg, as Agent Phil Coulson; Djimon Hounsou (also in “Guardians of the Galaxy”) and Gemma Chang (Crazy Rich Asians) as Kree warriors; Lee Pace as hammer yielding Kree leader, Ronan; and Lashana Lynch as Maria, Vers' (or rather, Carol's) best friend and old air force colleague. There is also a lovable, orange cat named Goose that shows up from time to time. Trust me, not only is he a scene stealer, you are in for big surprise you never saw coming.

Co-directors Boden and Fleck are also credited for the screenplay which they co-wrote with Geneva Robertson-Dworet. The result is a well crafted scifi fantasy/action adventure with just the right blend of good storytelling, special effects, action, and humor.

Be sure to stay after the credits so you can catch the teaser clips featuring Black Widow (Scarlett Johansson), Captain America (Chris Evans) and yes, Captain Marvel (Brie Larson) from the upcoming sequel, ‘Avengers: Endgame,’ scheduled to be released in theaters on April 25.