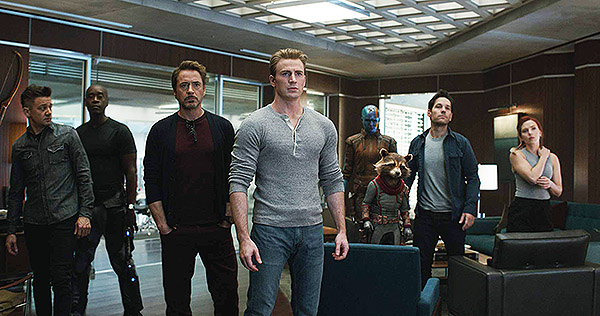 Whatever it takes! That is the theme and driving force for the superheroes to restore the world in the highly anticipated, final chapter in the Marvel Cinematic Universe (MCU) that spanned 22 movies, starting with 2008's Iron Man.

Each has dealt with the tragic defeat by moving on in their own distinct way. For example, Thor has turned into a lazy, fat, beer guzzling drunk. Scientist Bruce Banner has merged his mild mannered persona with his raging alter ego, The Hulk, thus becoming a friendly, approachable celebrity, of sorts and Hawkeye (Jeremy Renner), whom we catch up with during his rampage in Japan, is filled with grief and vengeance after losing his wife and daughter.

But all is not lost...yet. Despite some apprehension at first, the team ultimately decides rather than sitting back and accepting defeat, they need to take a stand with a purpose and mission, and that is to go after Thanos, kill him, retrieve the stones and reverse all the devastation.  As  Black Widow states,: ”Even if there is a small chance to do this, we owe it to everyone to try.”

Unfortunately, at first, things don't turn out so well. Enter Ant Man (Paul Rudd) who returns after being trapped in a Quantum Realm during the time the Avengers were previously trying to stop Thanos. He comes up with the idea of performing a “time heist” in which members of the team must travel back in time to a point before Thanos got the stones that he used to destroy the world. With reward comes risks, as we all know whenever a narrative involves time travel. The stakes are high and there are a few deadly consequences that come into play during their plan to save the universe and bring back everyone.

Clocking in at a minute over 3 hours, the final installment, directed by Anthony and Joe Russo, from a script by Christopher Marcus and Stephen McFeely, is nothing short of ambitious, moves along at a steady pace, but is not without its problems. At times, I felt some elements were a bit convoluted, as it goes from character to character and different times and space. Some things simply don't make sense, as when Captain Marvel, who is totally underutilized, appears early on, then disappears to help other planets in peril, as if her home planet Earth is not her number one priority, before returning towards the end. On the plus side, End Game features a fantastic cast, a mix of action, sadness and humor that include some very funny lines from Ant Man, Thor, The Hulk and the snarky, ever wisecracking, Rocket the Racoon. There are also some heart wrenching moments with key players from the past, and from Chris Evans' Captain America at the end, that will bring you to tears.

With so many superheros in the Marvel Universe, not all are main players, but the rest gather together and join forces towards the conclusion for the fierce, action packed battle scene. In an attempt to cramp every integral sideline character from the MCU, there are many cameo appearances that range from just standing there, a quick screenshot, to pertinent moments from the likes of Gwyneth Paltrow, Tilda Swinton, Rene Russo, Michael Douglas, Natalie Portman, Samuel L. Jackson, Jon Favreau, of course, the late Stan Lee, and other familiar faces, that I won't divulge.

I have no doubt millions of Marvel fanatics will have a picnic, loving every morsel of what is served up in this conclusion of the series. Was I, personally, satisfied? Let me put it this way. I was entertained and never bored by the shear spectacle of it all. But, due to several head scratching moments and other shortcomings, I can't say I was totally satisfied, and as a result, I left a bit disappointed.