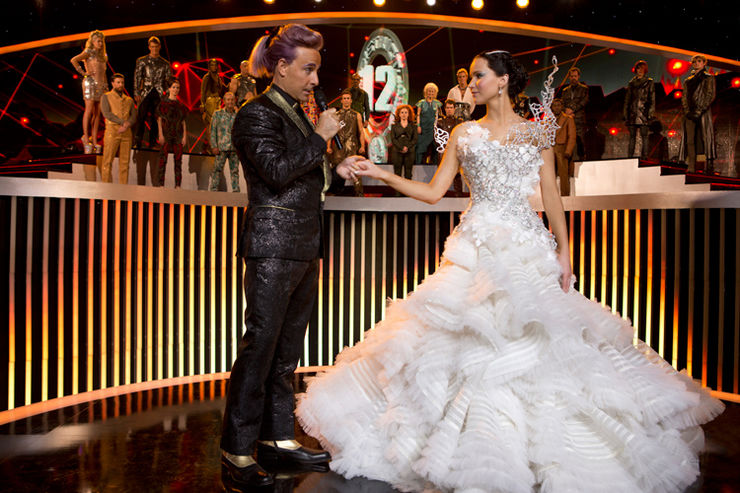 It is not often that a movie sequel is superior to the original. Yet, that is exactly what you get with The Hunger Games: Catching Fire, the second of the film franchise based on Suzanne Collins’s series of best selling novels set in the dystopian future of Panem, the post apocalyptic, former United States. The first movie was a huge box office hit and this grander, more engaging installment is sure to surpass it.  The bigger budget was definitely put to good use.

Catching Fire begins where the first movie left off.  Having returned home in the aftermath of the 74th Hunger Games, a year later teenage victors Katniss Everdeen (Lawrence) and her fellow tribute, Peeta Mellmark (Hutcherson) are forced to leave their loved ones behind, and embark on a Victory Tour of the districts. With the threat of death to her loved ones, and the destruction of her district if she doesn't stick with the program, Katniss and Peeta must convince the populace of their fake love match which is meant as a distraction so that no one realizes the real problems.

Believing that they will never again have to enter the arena and fight for their lives soon proves to be false.

Katniss never saw herself as a hero or wanted to be a revolutionary, but since gaining the peoples' attention for her courageous, selfless deeds, such as stepping in to replace her younger sister Primrose (Willow Shields), when she was reaped for the 74th Hunger Games, and then willing to eat poisonous berries in order to sacrifice her life for Peeta's, Katniss has become a symbol of hope for the oppressed masses. Fearing how this threatens his regime at the Capitol, the cold hearted, cunning President Snow (Donald Sutherland) must figure out a way to get rid of Katniss and quash the uprising.

Enter new Gamemaker, brilliant and sly Plutarch Heavensbee (Phillip Seymour Hoffman), who comes up with an idea of a special 75th anniversary edition of the games called the Quarter Quell that pits an eclectic assortment of  former male and female winners and experienced killers known as Careers, against each other in the ultimate battle to the death where there will be no victor or winner, just one survivor left standing.

The “Game” is now an all out war in which the stakes have been raised with the warriors sent to a new arena located inside a dome enclosed, jungle filled island, booby trapped with deadly obstacles including a poisonous fog, vicious baboons, and humongous, all-engulfing waves.

Katniss and Peeta soon form an alliance with several combatants including sarcastic pretty boy, Finnick  (British actor Sam Claflin, Snow White and The Huntsman), Mags, an elderly, mute woman (Lynn Cohen),  sexy kick ass, defiant Johanna (Jena Malone), tech savy Beetee  (Jeffrey Wright) and his partner Wiress (the ever eccentric, underused Amanda Plummer) to fend off strategically planned island attacks by the powers that be, tracking their every move before they are forced to go against each other.

As if she doesn't have enough on her plate, Katniss is caught in the middle of a love triangle between her fake romantic interest Peeta (who is clearly in love with her) and best friend/true love Gale, although there are hints brewing as to Katniss' possible change of heart which should figure into the next installment.

Working from a smart script by Simon Beaufoy ("Slumdog Millionaire") and Michael Arndt (Little Miss Sunshine) new director, Francis Lawrence (taking over from predecessor Gary Ross) effectively delivers an intriguing, highly entertaining film enhanced by dazzling special effects and stunning Oscar worthy costumes and set design. A standout is the scene where Katniss's gown is suddenly transformed into a birdlike design complete with winged arms reaching out, symbolically representing her ability to rise up like a phoenix from the ashes.

Both fans of the books and those who haven't read the trilogy should come away satisfied by the absorbing storyline that deals with friendship, love, trust, loyalty, courage and the fight against government oppression.

Thanks to Jennifer Lawrence whose career is on fire, and everyone involved in the making of this film, The Hunger Games: Catching Fire grabs and keeps your attention from the get go till the end which acts as a set up for what is to come. Hopefully, the odds are in our favor that the next chapter of the Hunger Games: Mockingjay Part I, will burn just as bright.