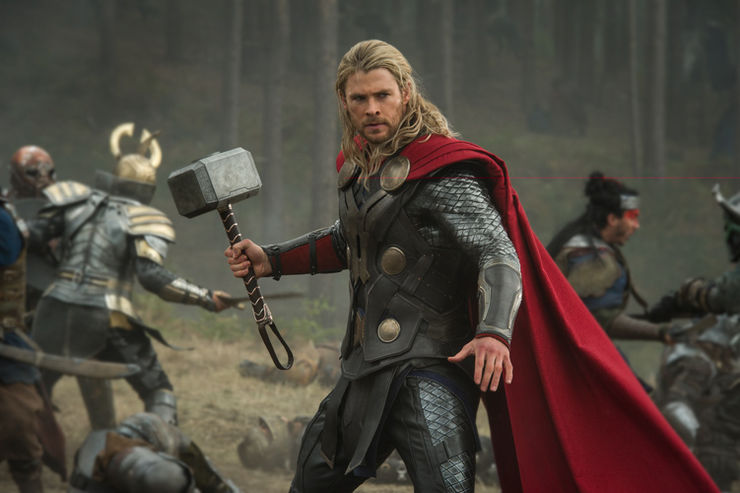 In this go around, its has been two years after Thor teamed up with his fellow superheroes, The Avengers, to save New York from an attack of baddies and since then he has been busy restoring order to the realms. In the aftermath of the assault on New York, Thor's father, King Odin (Anthony Hopkins) has locked away Thor's trickster, shapeshifting brother Loki (charismatic, standout, Tom Hiddleston) in a prison cell for the the rest of his life to pay for his evil deeds. Although he is dangerous and cannot be trusted, Loki is eventually asked by Thor to help him battle a more threatening foe, an ancient race of Dark Elves that date back before the beginning of time, led by the villainous Malekeith (a one note Christopher Eccleston) who is intent on plunging the universe into darkness. All Malekeith needs to succeed in his goal is to get his hands on a powerful weapon, the Aether, a gaseous substance with the ability for mass destruction. The timing could not be better. Wouldn't you know, it just so happens that The Convergence, a rare cosmic occurrence that takes place only once every thousands of years, when all Nine Realms come into in perfect alignment, is about to begin.

Meanwhile, now based in England, the pretty nuclear physicist Jane Foster (Natalie Portman) Thor became smitten with back on earth in the first movie, is summoned by her intern Darcy (the off beat and comical Kat Dennings) to a warehouse to investigate some strange phenomenon. While checking it out, Jane is sucked into another realm where she stumbles across the whereabouts of the Aether and before you know it, the mist-like malevalent “thing” grabs hold of her, taking over her body. Of course, it is up to Thor to find and rescue the damsel in distress, rid the Aether from her body and save the universe from the Dark Elves once and for all.

It's all very contrived with the inclusion of several extremely unlikely co-incidences. While the first film was a mix of fish out of water tale and sci fi action adventure with some humor thrown in, this sequel is a muddled mess in which director Allan Taylor (taking over the reigns from Kenneth Branagh who helmed the first film) puts the emphasis on delivering a barrage of visually impressive CGI action sequences rather than a good, coherent script.

Even the occasional humor seems forced and falls flat.  It comes as no surprise that several writers (in this case no less than four: Christopher Yost, Christopher Markus, Stephen Markus, Stephen McFeely and Don Payn) are credited for the screenplay. That is never a good thing.

Here's hoping writers “hammer” out a better story for the sequel.  A teaser clip after the credits is an assurance that episode number three of the franchise is on the way.