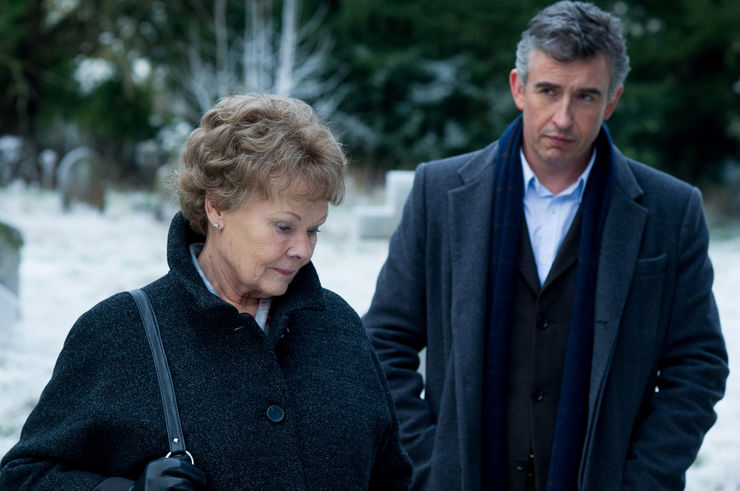 There is nothing stronger than a mother's love for her child. Time and distance can never erase that indelible bond. A perfect example is this touching, emotionally moving story, with just the right balance of drama and comedy starring the ever terrific Dame Judi Dench as the title character, a real life Irish woman who was determined to find the son taken away from her when she was a young unwed teenager. Actor Steve Coogan, best known for his comedy roles, for the most part gets serious as Dench's co-star.  He also is credited as the film's producer as well as cowriter of the screenplay with Jeff Pope (Pierrepoint: The Last Hangman).

Based on true events detailed in the 2009 investigative book, The Lost Child of Philomena Lee by BBC correspondent Martin Sixsmith, the story, deftly directed by Stephen Frears’ (Fail Safe, The Queen) focuses on the journey of retired nurse Philomena Lee (Dench) fifty years after giving birth to a son she had named Anthony.

It all began during a moment of uncontrollable desire between a young and naive Philomena (played by Sophie Kennedy Clark) and a handsome young man that would forever change her life. It was a different time then, when conceiving a child out of wedlock was considered immoral and shameful, not like these days when young unmarried females proudly show off their ever growing baby bump. But, let me not distract from the story at hand.

Shamed to discover his daughter is pregnant, Philomena's father sends her off to The Sisters of The Sacred Heart abbey, run by strict, judgmental nuns, where she lived and worked like a slave seven days a week in exchange for them delivering and caring for her baby.  Trapped and unable to leave without paying a hefty fee, Philomena and other teenage mothers, some as young as 14,  were forced to endure the hardship of residing in a place where they were only allowed to spend one hour with their child each day.  To make matters worse, each had to withstand the emotional torture of witnessing their child being taken away by wealthy adoptive parents, mostly Americans, to be raised in the states. To top it off, each girl was  made to sign a contract relinquishing their parenthood and the right to forever inquire about their child's whereabouts.

Coogan enters the picture as Martin Sixsmith, a former BBC reporter who is depressed after losing his job because of a political scandal.  Soon, during a chance encounter, he is enlisted by Philomena's grown daughter, Jane (Anna Maxwell Martin), to help find her mother's long lost son. It isn't something Martin wanted to tackle, but in need of a paying, freelance assignment, he reluctantly accepts the job as a proposed “human interest” story for a tabloid and teams up with Philomena.

The pair are quite a contrast.  Philomena is a devout Catholic who remains deeply religious in spite of the cruel treatment by the Church and its nuns. Martin, on the other hand, is a former Catholic turned cynical non believer, eager to expose the church for its misdeeds, injustice, hypocrisy, secrets and lies.

As Sixmith's research winds up taking the pair to America, layers of information about Philomena's son is revealed, ultimately leading to an ironic, tearful twist.

For both Dench and comic actor Coogan, their roles are a departure from what we are used to. Dench is known mostly for portraying smart, powerful, regal women and this time she plays a chatty, simple, dowdy Irish woman, delivering a sweet and poignant performance. And, as the cynical journalist she teams up with, Coogan plays against type, turning in an effective performance as well as sharing great chemistry with Dench.

Clocking in at only 95 minutes, the story beautifully explores the power of love, faith, loss forgiveness, reconciliation and redemption.  I love the fact that it does so without coming across as overly sentimental and syrupy. Although heartbreaking and controversial for its factual depiction of despicable Church practices that will most likely enrage the devout true believers, Philomena definitely is a well crafted, beautifully acted, human interest story worth seeing.