The Hobbit: The Desolation of Smaug | Review 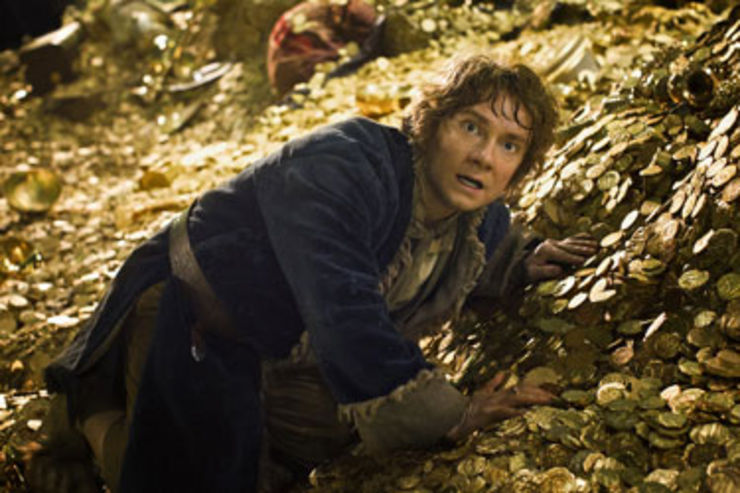 The Hobbit:  The Desolation of Smaug | Review

The Hobbit:  The Desolation of Smaug

The first, introductory chapter of director Peter Jackson's highly anticipated big screen adaptation of J.R.R. Tolkien's best selling fantasy book The Hobbit,  was an immersive masterpiece that drew me in from the get go with its the engrossing story and spectacular visuals.

Jackson wasn't satisfied to end it there.  So, using his imagination and creative license the filmmaker and his co-writers, Fran Walsh and Philippa Boyens, have stretched JRR Tolkien's original 300 page novel into a three part film franchise with new characters nowhere to be found in the book.  On the positive side, the movie is filled with a terrific returning cast and some newbies, eye dazzling art direction, CGI effects, and cinematography. Unfortunately, this second installment of the trilogy, “based” on the book, is somewhat of a letdown, with the focus on pumped up action sequences.

Returning to the fantasy world of Middle earth, 60 years before "The Lord of the Rings”, the adventure begins where part one left off.  Secretly carrying the powerful ring he obtained during his encounter with Gollum in the Goblin Tunnels in the previous chapter, the titled character, reluctant hero, hobbit Bilbo Baggins (Martin Freeman) continues his epic quest with the thirteen Dwarves, led by Thorin Oakenshield (Richard Armitage), and Wizard, Gandolf The Grey (Ian McKellan)  to Lonely Mountain to reclaim the lost Dwarf Kingdom of Erebor and return Thorn to his rightful place on the throne.

Along the way, Baggins and his cohorts find themselves confronted by a series of life threatening, menacing obstacles and are forced to fight off a swarm of vicious giant spiders in the danger engulfed forest of Mirkwood, and engage in a battle with the ugly, evil beasts, Orcs, before they eventually reach the mountain.

Showing up out of nowhere at just the right time to save the day are handsome blonde, archer/warrior elf Legolas (Orlando Bloom) and the equally striking, kick ass she-elf, Tauriel (Lost's Evangeline Lily).

At one point,  much needed aid also comes in the form of Bard (Luke Evans), a mysterious fisherman from the aptly named Laketown, a village on the water, run by the corrupt, greedy and tyrannical Master (Stephen Fry).

Eventually, after finally making it to their destination and entering the mountain's secret door, the brave Baggins winds up confronted by the greatest danger of them all, the deadly, terrifying, fire breathing dragon, Smaug (voiced by Benedict Cumberbatch).  In the dragon's lair filled with heaping mounds of gold and jewels and the hidden magical gem, Arkenstone, Baggons must keep his wits, distract the beast, and use his skills as a “burglar” to search, find and ultimately recover the glowing rock.

The inclusion of the new strong, female character, Tauriel, is a welcome addition to the cast. However, the implied romantic/love triangle subplot between her, Lagolas, and the good looking, unusually tall, dark haired dwarf, Kili (Aidan Turner) is  unnecessary.  That is, of course, if it fails to play out as a relevant plot device in the final chapter.

All in all,  I was prepared to be blown away by this second installment of the Hobbit, like I was with the first.  Instead, I found this flick, at 160 minutes, to be way too long, tedious, and drawn out, with the emphasis on one after another, violence filled action sequences.

Essentially, what started out as the “Unexpected Journey” has evolved into a never ending journey that keeps dragon-on.  I can only hope all the story threads will lead to a satisfying conclusion in the final chapter.