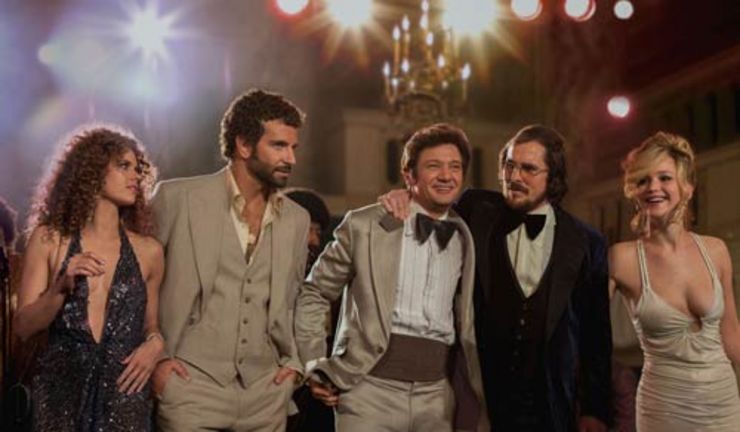 If you've seen the trailers or heard the buzz, you know American Hustle has nothing to do with the dance craze of the 1970's featured in the blockbuster musical Saturday Night Fever.  However, the film does take place in that era, exquisitely capturing the fashions and big hair of the times, but centers on a “hustle” of a different kind;  a dance of deception in which some very slick moves come into play.

“Some of this really happened”, it reads in the opening title.  Loosely based on the real life ABSCAM scandal and sting operation of the late 1970's involving a pair of con artists and the FBI, this dark comedy reteams director David O Russell with his The Fighter co-stars Christian Bale and Amy Adams, and his Silver Linings Playlist stars Jennifer Lawrence and Bradley Cooper.

Bale once again proves that he is a chameleon and one of the best actors of his generation, disappearing into the lead role of Bronx born Irving Rosenfeld, a confident, manipulative con artist (as if there is any other kind) with a bad combover and bulging belly.  Amy Adams plays striking and seductive Sydney Prosser, a former stripper turned grifter that Irving falls hard for and becomes his partner in crime to scam some unsuspecting poor schnooks out of their money in fake investment schemes.

It doesn't take too long before the duo with big dreams are busted by Richie DiMaso (Bradley Cooper), an ambitious, anxiety driven FBI agent, who forces them to take part in a sting operation to expose corrupt politicians or go to jail.

It all centers around pretense and making people believe what they want to believe. Irving spends time each morning meticulously fixing his “hair”, and Sydney takes on the fake persona of Edith, a British socialite with bank connections, who parades around in attention getting, revealing, low plunging necklines as a means of manipulation.  Just as phony is Richie, who comes across as a macho Federal agent during the day, but wears curlers in his hair at night in the home he shares with his mom.

One of their marks is Camden Jersey Mayor, Carmen Polito (Jeremy Renner, with an over the top black pompadour), a guy with good intentions who wants to rebuild Atlantic City but becomes an unfortunate victim of illegal money transactions to fund his cause. Michael Pena is cast in a small but pivital role as the scammers' Hispanic friend enlisted to pose as a fake sheik with millions to invest.  Also figuring into the scenario is a mob boss (played by none other than Robert Di Niro type cast in a cameo role) eager to score a piece of the action.

Meanwhile, stirring up the pot (and plot) is Irving's neglected, bored wife, Roslyn (Jennifer Lawrence, in upswept big hair) back home in Long Island.  Not as ditzy as she appears, Roslyn is on to her husband's “affair” with Sydney and his other shady dealings. Called “the princess of passive-aggressive karate” by her hubby, the brassy Roslyn refuses to be ignored. Given the fact that she is a loose cannon with knowledge of some pertinent information, her unpredictable behavior eventually leads to trouble.

Political corruption, bribes, money, sex, mobsters, double crosses, and love triangles, all factor in this wild and crazy caper. It is apparent Russell was influenced by acclaimed filmmaker Martin Scorcese and as a result, American Hustle plays out like a wacky mix of Goodfellas, Casino and The Sting.

The film is a worthy and entertaining effort by Russell.  Yet, it didn't quite live up to my expectations as I found the movie to be a bit too chaotic for my taste.

What stands out are the excellent performances by Bale, Adams, Cooper and Lawrence.  Each totally immerse themselves in their respective roles, appearing at the top of the game in what is surely one of the best ensemble casts of the year.  They alone are reason enough to see this film.

American Hustle is a good film, but not as great as the hype.  Don't be conned into believing this is the best picture of the year. Remember, deception is the name of the game.

A bit of trivia - Bale packed on almost fifty pounds, and shaved part of his head to embody the character based on real life con man Melvin Weinberg, whom the actor spent time with to learn the art of deception.