The Wolf of Wall Street | Review 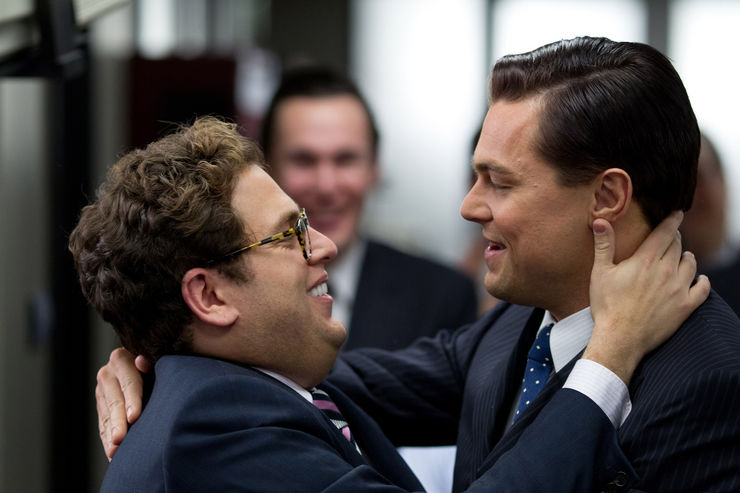 The Wolf of Wall Street | Review

The Wolf of Wall Street

Director David O. Russell tried to emulate Martin Scorcese's filmmaking style with his latest film, American Hustle, a fictionalized version of a real FBI sting operation during the late 1970's involving a couple of professional scam artists that made headlines.  Now, on the heels of that movie's release, comes Scorcese's new flick, that is based on a real life swindler who conned millions out of his clients and lived a life filled with excessive self indulgences before an FBI agent (Kyle Chandler) started an investigation into his firm's shady business practices.

While American Hustle didn't totally meet my expectations, at least I admired the director's effort and was entertained by the terrific ensemble cast. Scorcese, on the other hand, should be ashamed for stooping into territory that is way beneath him.  There is no excuse for filling the screen with three hours of pornographic material, featuring explicit sexual activity, nudity, drug and alcohol abuse, vulgar language, as well as the objectification of women and mistreatment of little people.  In fact, Scorcese wastes no time, starting off with a shocking, lewd scene at the beginning that sets the film's tone. Boogie Nights was all about the porn industry and yet that film was delivered with more class than this.

Terence Winter's (“Boardwalk Empire”) screenplay is based on Jordan Belfort's 2007 memoir that details his rise and fall as a brilliant, but morally corrupt, Wall Street stockbroker.  The film marks the fifth collaboration between director Martin Scorcese and Oscar nominated actor Leonardo Di Caprio.

Set in New York in the 1980's, the charismatic Di Caprio totally immerses himself into the role of real life Jordan Belfort, who warranted the title “The Wolf of Wall Street” during his notorious time at the top.  He was just 22, when Jordan landed his first job at a Wall Street firm.  That is where the ambitious young man learned the ways of and means of getting rich at the expense of his clients during a meeting with senior broker Mark Hanna (Matthew McConaughey, in a scene stealing cameo).

Like the scam artists in American Hustle, to reach their goal of becoming rich the con must be a superb salesman who must gain the confidence and trust of their “victim” in order to sucker them into giving them their money. “Move money from the client's pocket into your pocket. Keep them on a ferris wheel by reinvesting their money so you can get a commission. That's the name of the game and the way to make millions” Hanna informs Jordan.

Lacking any moral compass, conscience, or regard for the consequences, that's all Jordan needed to fire him up on how to sell penny stocks and eventually branching out and founding his own firm, Stratton Oakmont, that would  allow him to live the perfect life of the rich and famous.

Only Jordan took it to the extreme, using his mega earnings to purchase a lavish seven acre estate and palatial mansion on Long Island and  a huge yacht, leaving his first wife (Cristin Milioti) for a trophy wife and indulging in a totally decadent lifestyle that included cocaine, qualudes, hookers, orgies, and all sorts of debauchery.  Australian newcomer, Margot Robbie makes a striking impression as Jordan's second wife Naomi, a blonde bombshell from Brooklyn, who enjoys the expensive gifts and privileged life that comes with being married to a rich man.  However, not being a push over, she won't put up with his crap.

Jonah Hill lends strong support as Donnie Azoff, a server in a diner with glistening fake white teeth,  who quits his job to work with Jordan as his right hand man/partner in helping to enlist a staff of young and hungry employees and maintain Jordan's Wall Street firm.  Although physical opposites, they soon become best friends  and share a series of drug induced escapades among other nefarious wheeling and dealings.

Rob Reiner appears in a small role as Jordan's loud mouth dad, “Mad Max”. And, In a surprise casting, writer Fran Lebowitz makes a very brief (blink and you will miss her) cameo appearance as a court judge.

During a recent TV interview, the following is what Scorsese and DiCaprio said about the making of the movie.

“The film was different in its approach; more radical; a discovery process to see what would happen if we put ourselves in that environment and gave the actors the freedom to do what they wanted. It was very experimental and spontaneous. Encouraged to improvise on the set, everyone took on  a hedonistic attitude giving into every temptation possibility that allowed for insane possibilities.  We wanted to take a lot of chances and make the movie we wanted to make.  Our financiers and collaborators told us to push the envelope, be free artistically and go to places you never imagined,” said Di Caprio.

Scorsese was adamant about not being restricted and when asked about towing the line responded,  “At 71, I won't go with a group of people or studio if there are restrictions of too much drug taking or sex.  There is no point in making a film if I would be constantly distracted by the level of restrictions”.

That said, it still wasn't necessary to bombard viewers with lewd and obscene scenes as well as continuous dropping of the F-bomb  to the point of going over the line into Judd Apatow  territory, where there are no holds barred and everything goes. There is so much explicit, graphic scenes, I don't know why it didn't receive an NC-17 rating.

Creative license is one thing. Thinking you can get away with anything because you are a revered, aging director is something else.  The Wolf of Wall Street” is a cautionary tale about what happens when people are consumed and motivated by wealth and greed.  Unfortunately, just like the titular character, this drug infused ride is bogged down by an overdose of seedy, make that disgusting, elements.  And like Belfort, that is its downfall.