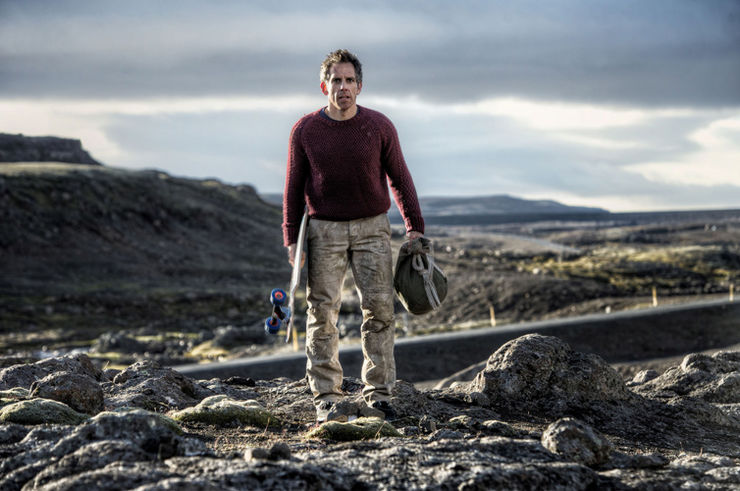 The Secret Life of Walter Mitty

James Thurber's 1939 short story about a day dreaming meek man who fantasizes himself as a heroic figure, first appeared in New Yorker magazine. Eight years later, it was turned into a 1947 film version starring the great comic actor Danny Kaye and now the story, has been re-imagined (a fitting word, I must say), retooled and updated in this new film directed by and starring Ben Stiller with just the original basic premise kept in tact.

The screenplay by Steve Conrad (The Pursuit of Happyness) sets up the story in modern day Manhattan at Life Magazine where the timid, unassuming Walter Mitty (Stiller) works as the negative asset manager of the photo department alongside assistant Hernando (Adrian Martinez) when not zoning out on occasion and letting his imagination take over.  Most of his fantasy scenarios revolve around picturing himself as a dashing hero coming to the rescue of co-worker Cheryl (an appealing Kristen Wiig). You see, he secretly has a crush on Cheryl, but even in the privacy of his own home, barely has it in him to send her a “wink” on the E Harmony on line dating site.

Meanwhile, back at Life's corporate offices, the magazine is getting ready to transition from print issues to on line publication.  A new, obnoxious executive, Ted Hendricks (Adam Scott, in a strange looking beard) is sent in to spearhead the transition, which means most likely many of the employees will be let go. Knowing that his job is on the line, when Walter is unable to locate the negative taken by daring, photo journalist Sean O'Connell, (a stoic Sean Penn, who has gotten better looking as he ages), he decides to embark on a journey around the world to track down the elusive globe trotting photographer that has since gone missing.

Walter's odyssey into the unknown leads him on extraordinary adventures in Iceland, Greenland, Afghanistan and the Himalayas, while intermittently taking calls on his cell phone (it is unbelievable that you would be able to get any mobile service in those remote areas) from Todd (Patton Oswalt) the E Harmony customer service rep who, for some odd reason, feels the need to stay connected with his new phone buddy.

Each destination presents Walter with new, exciting and often dangerous challenges.  The chain of events such as jumping from a helicopter, fighting off sharks in the ocean, taking a strenuous bike ride, skateboarding, narrowing escaping a volcano eruption, and climbing up to the top of the steep, frozen snow covered mountains of the Himalayas, finds Walter transforming from a timid little man into a real action hero that formerly could only come to life through his everyday fantasies.

The life affirming message is loud and clear, but Stiller's treatment of the subject matter would have had more impact if it was less pretentious, more subtle and he didn't try so hard at being profound. The many contrivances, implausible scenes and absurd moments don't help nor do the often blurred lines between his imagination and reality.

The motto of Life Magazine, which is written on the walls of the reception area reads,  “To go behind walls, to find each other, to draw closer, to see, experience, and feel the purpose of life”.  Those words of wisdom often can be seen inscribed within camera shots of several other locations and settings that Walter passes by, as if it is necessary to consistently bombard us with in our face clues as to what this film is trying to say.

Stiller may have put his heart and soul into this project. Unfortunately, it lacks deep emotional resonance. On a positive note, the film is visually impressive with stunning cinematography by Stuart Dryburgh (The Piano) who beautifully captures the sprawling and lush outdoor scenery and amazing vistas in all its glory.

I appreciate Stiller's effort and very much like the surprise, poignant, ending. Too bad the unfolding narrative leading up to that wasn't as effective.