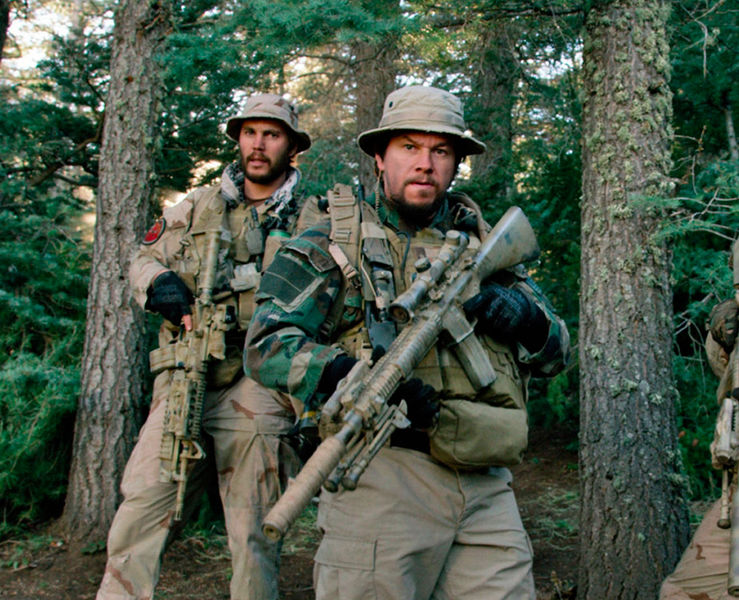 Lone Survivor is difficult to watch, but that doesn't mean it isn't a memorable, worthwhile movie.  Just expect to squirm in your seat and dig your nails into the armrest as you watch the horrors of men in combat unfold before your eyes.

Director/writer Peter Berg wrote the screenplay he adapted from Navy Seal Marcus Littrell's best selling 2007 book (written with Patrick Robinson) that tells the true story of his team's operation in Afghanistan in 2005 that went horrifically bad.  The title is more than just a hint.  It lets you know right away that in the end there will be only one, sole survivor, who was able to recount what he and his men incurred.

In the beginning viewers are shown actual footage from the intense mental and physical training soldiers go through in order to become a member of the elite Navy Seals,  highly skilled special forces unit sent to conduct clandestine missions behind enemy lines.  Their job is to capture enemy targets and intelligence against impossible odds.

Impossible odds are the key words that come into play when a very bad decision leads to devastating consequences.

The four lead actors turn in powerful performances in what were emotional and physically demanding roles. Mark Wahlberg plays medic Marcus Luttrell, who, along with three of his fellow Navy Seals, Mike Murphy (Taylor Kitch), Max Axelson (Ben Foster) and Danny Dietz (Emile Hirsch) in 2005 were sent on a mission by their Commander Christenson (Eric Bana), labeled Operation Red Wings,  to seek out and eradicate Taliban terrorist leader Ahmed Shah (Yousuf Azami) hiding in a small village in Afghanistan.

A wrench in their plans that winds up sealing their fate, begins with the unfortunate approach of three goat herders (2 young boys and and old man) who stumble across their position while on the lookout atop a mountain hill. After capturing and tying them up, instead of killing them, the soldiers make a regrettable decision to let them go with the risk that the team will be tracked down.

I hate the expression “there is no good deed that doesn't go unpunished”, but this one surely fits the bill in the worst possible way, when the seals soon find themselves ambushed and fighting for their lives.

Director Berg (Friday Night Lights) holds nothing back in his depiction of their struggle, complete with graphic, bloody, gut-wrenching details that are almost unbearable to watch. Shot in such an impactful way, as the camera follows the young men relentlessly being bombarded by enemy forces, the audience experiences each and every assault and the resulting pain on the men as if riding their shoulders.  With each violent attack the team are gradually slowed down by bullets and grenades that rip through their bodies as well as bone crushing injuries incurred during head over heals (literally) plummeting down the steep rocky mountain terrain as they desperately attempt to navigate their way to safety.

It isn't a pretty picture, but this highly intense, gripping true story, does paint an incredible portrait of the patriotic, brave and heroic Navy Seals whose mindset is “never give up the fight” and explores their unflinching loyalty and commitment to each other and their mission.

For those who have put their lives on the line, died, or lost a loved one in combat, this is an effective, moving tribute.