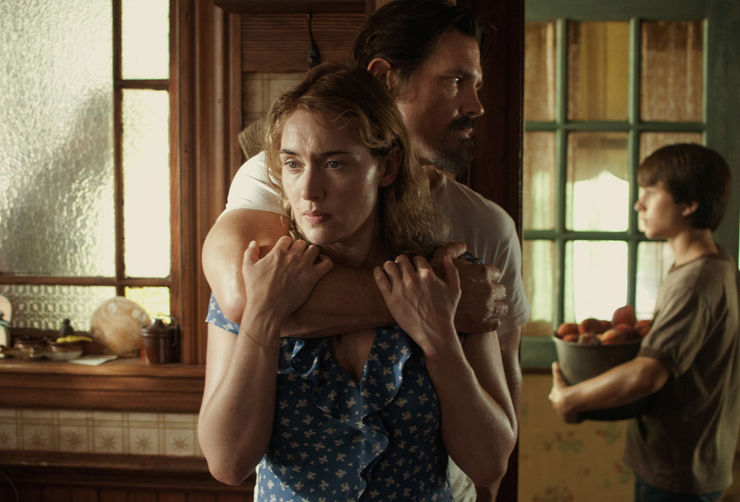 I have seen numerous romantic melodramas throughout the years, but Labor Day has got to be one of the most ridiculous.  I find it hard to believe that Jason Reitman, the same guy who directed such praiseworthy, offbeat films as Thank You for Smoking, Up in the Air and Young Adult, wrote and directed this disappointing movie that he adapted from Joyce Maynard's novel. Moreover, the two leads, Kate Winslet and Josh Brolin are both fine actors and have good chemistry, but are unable to lift the sappy, poor script.

Set in a small New England town in 1987, the story takes place over the course of five days during the hot labor day weekend as it is told in flashbacks from the point of view of Henry (voice over narration by Tobey Maguire who doesn't appear on screen until the end of the film).

In the beginning, we meet Adele (Winset) a divorced, lonely and depressed woman living with her 13 year old son Henry (Gattlin Griffith) after her husband left her for his secretary. On one of those rare occasions that she leaves the house, Adele takes Henry on a shopping spree at the local Price Mart to buy him some clothes just before he goes back to school. It is at the department store where they are approached by Frank Wheeler (Brolin) a mysterious stranger, bleeding from his right side, in need of help who coerces Adele to take him in. Soon it is revealed that Frank had escaped from a hospital after an appendectomy and is desperate for a place to hide out until his recovery. The believability begins and ends there.  After the initial fear of harm to her son unless she went along with his scheme, both Adele's and Frank's behavior evolve as either stupid and/or implausible.

For one thing, no way would any loving mother willingly harbor a dangerous fugitive that jeopardizes her and her son's life, regardless of whether he says he is innocent of the heinous crime that sent him to prison. Without questioning or the least bit fearing what he will do next, she allows Frank to tie her up (and spoon feed her chili) so it appears they are not in cahoots just in case the cops suddenly showed up. Later, rather than keeping low and away from plain sight to prevent being caught, it makes no sense that he continually leaves the front door unlocked for anyone to walk in unexpectedly. Duh!

Despite the fact that he is a convicted murderer, Adele soon begins to fall in love with Frank.  Why? Because not only is Frank a handsome hunk, he has a heart of gold, can cook, is useful around the house doing chores that have been neglected like the laundry and ironing, waxing the floors, grouting the cellar, fixing a squeaky door, working on Adele's old car, and acting as a surrogate Dad for her son. At one point, Frank declares, “I came to save you, Adele”. What a load of unbelievable crap to think he, an escaped convict no less, winds up being just what this woman needed to rescue her from a self imposed state of misery.

Although there is no nudity or sex scenes, there is a sexual undercurrent that surfaces in erotically charges scenes. For instance, Adele and Frank get up close and personal, interlocking fingers while mashing peaches in a bowl, reminiscent of Demi Moore and Patrick Swayze's wet clay sculpting scene in Ghost. While that moment in Ghost delivered an emotional wallop, the pie making scene doesn't quite deliver the same effect.

The movie contains elements of a coming of age tale involving Henry's budding sexuality and his attraction to the new, sassy, overly precocious young girl in school from a broken home (Brighid Fleming) that could be a bad influence.  It is a contrived subplot that parallels his mom's longing and need for physical affection as well as male influence.

Based on the trailers, Labor Day sure looks like another one of those Nicholas Sparks novels adapted to the big screen. At least with them, you won't have any failed expectations.

Along with the moody and dreary atmosphere and the dull, pounding score by Rolfe Kent that is suppose to, but fails to build tension, I found Labor Day to be painstakingly laborious and unsatisfying.