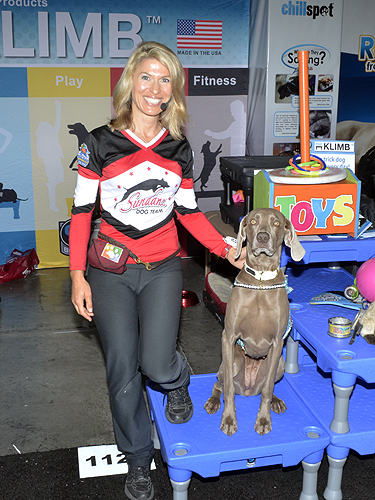 Recently, at the SuperZoo 2015 trade show at Mandalay Bay, I had the opportunity to experience the true meaning of a “dog-day afternoon.”

That’s when I got the chance to do a fun interview with world-acclaimed Stunt Dog Show performer/celebrity dog trainer/internationally bestselling author Krya Sundance and her seven-year-old female Weimaraner, Jadie. Yes, Kyra did most of the talking but if you think that Jadie didn’t answer some of the questions all on her own that I asked her, then you’re barking up the wrong tree, as this video will prove.

Before the interview, Jadie showed off her well-trained skills by doing several stunts, including painting on a canvas using a paintbrush that she wielded in her mouth and picking up her toys and putting them in her toy box, which she opened and closed herself, all at Kyra’s command. With her training based on her feeling that “every dog deserves a place,” Kyra issued her commands from The Klimb, a platform with legs that dogs begin to think of as their “place,” which allows them to quickly focus and ignore distractions and on which they are rewarded upon following commands.

Kyra is also a bestselling author of several books. Her book 101 Dog Tricks has achieved major global success. She is nationally ranked in competitive dog sports, works as a set trainer for dog actors, and lectures for international professional dog organizations.

No doubt about it -- if you’re going to let yourself “go to the dogs,” this is the way to do it.