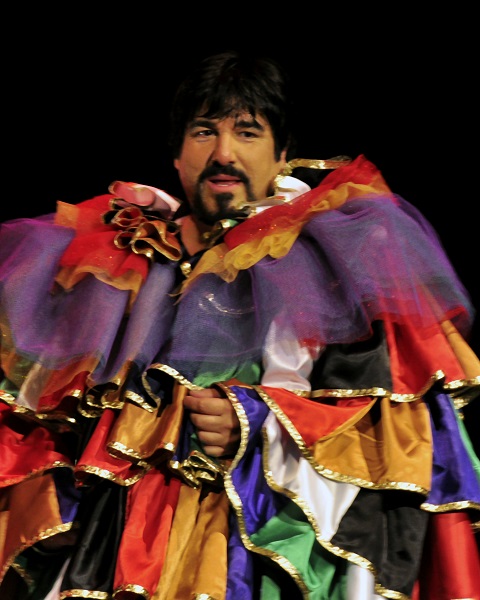 …Now there’s one enterprising artist who has found a way to “double your pleasure” while taking some new steps -- and groundbreaking ones at that. Meet Joe Spinella, nicknamed “The Tenor of Illusions,” who has created a show called “Illusionaria” in which he sings Italian songs and performs magic simultaneously – without missing a beat.

“I’ve been doing magic since I was 6 years old,” Spinella explains. “I read every magic book I could get my hands on and also went to magic school in the summer when regular school wasn’t in session. I am also a dramatic tenor who trained at the Manhattan School of Music in New York. About five years ago, I thought, why not combine the two and have something very unique and different? I started out doing simple illusions and singing songs. Today, the show has evolved into a major production with colorful costumes; extensive lighting, sets and stage effects, actors on stage with me, and me singing in Italian, Spanish, and English to the tracks of a full orchestra while doing mostly grand illusion.

“I recorded all original arrangements for the show with the Macedonia Radio Symphony Orchestra, an Emmy Award-winning world-class orchestra,” he adds. “For some shows, I have as many as 15 live musicians playing along with the 70-piece tracks. The costumes match the song I’m singing. For example, when I sing ‘Cor’n Grapo,’ I turn it onto a spaghetti western with costumes and a flavor resembling ‘The Good, The Bad, and The Ugly.’ The theme is that there is a saloon girl who wants to get away from me because I keep bugging her for more attention so I make her disappear. I create vignettes around the songs I’m singing and the magic fits the songs. I don’t do opera; I do what I call pop opera. I do seven or eight songs while performing my magic.”

Las Vegas press and invite4 guests had a chance to witness a sample of Spinella’s diverse talents and costumes up close and personal at a showcase put on for him recently by publicist Bruce Merrin and team at the Marriot Springhill Suites. Among the selections he performed was Puccini’s ‘Nessun Dorma’ to which he magically made a snowstorm appear at his fingertips. Spinella explains that the full show is in two parts, the first half being a scenario in which boy meets girl; boy proposes to girl; girl meets boy’s Italian mother; mother gets very jealous of fiancée; Mama puts fiancée into a box that elongates into several different sections that stretches her, and boy marries fiancée who has now been stretched to eight feet tall. The second half of the show is composed of vignettes.

“My biggest challenge is getting people to understand what my show is and how exciting and different it is because it’s such a new concept,” Spinella relates. “I knew it would take three to five years to build it. But no one really understood Cirque du Soleil when it first came out – it’s kind of like that. Performing the show is not a challenge. I’ve been singing these songs forever and doing magic forever. And I’m a natural ham on stage. I am so prepared and know my stuff so well that I can do it in my sleep.”

Appropriate for all cultures and all ages, “Illusionaria” is also a captivating means to introduce classical music to young people, which is one of Spinella’s missions. Characters appear and vanish, a beautiful woman morphs before the audience’s eyes, and handkerchiefs come to life, dance and disappear. Darker images of death boxes, a head dropping off Spinella’s shoulders, corpses rising from the stage, a mirror with images appearing and vanishing, and flying lights are among the many astounding illusions that Spinella commands while singing. The narrative of the show flows from a point of beauty and joy through darker struggles faced by mankind – death and the fear of loss – and then emerging from these depths to a playful world full of hope and light and even a comedic mood.

Spinella, by the way, has had success in the pop genre. After hearing one of the tenor’s songs played on the radio, Joe Vultis, Lady Gaga’s songwriter/producer, contacted Spinelli out of the blue and offered his help. Vultis suggested writing a piece of music that could get radio play to give Spinelli the recognition in the pop arena that he desired. So Vultis wrote two songs for the singer, one called “Trust In Me” (for which Spinelli wrote the Italian lyrics while Vultis wrote the music and English lyrics) that ended up being considered for the 2013 Grammys in three categories – Song of the Year, Producer of the Year, and Best New Artist. Although it didn’t make the final cut, Spinelli is thrilled to have initially been considered.

Currently, Spinelli is working on “Vegasizing” his show in hopes of bringing it to this market.

“Producer Michael LaFleur is putting a team together to make the show a Vegas contender,” Spinelli informs. “I have to be open to change. The costumes have to be embellished to give them more of the WOW! factor. That’s where we’re going with the show now.”

And this time he’s running, not walking.