For the Love of the Game 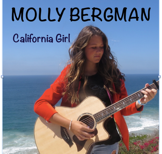 Back in 2004, Molly Bergman, the daughter of comedian Rita Rudner and writer/producer Martin Bergman, learned to play tennis – with a foam racquet -- in her hometown of Las Vegas, taking her first lesson with legendary Las Vegas coach Marty Hennessy at Turnberry Place. Now 14, Molly is looking to score with her first original E.P., “California Girl,” all for the “love” of music and the Marty Hennessey Inspiring Children Foundation.

Coincidentally, 2004 was the year Marty and Ryan Wolfington co-founded the foundation, which is a mentoring, education and tennis program that currently helps approximately 350 kids throughout Las Vegas by teaching tennis as a scholarship program for college. Since then, more than 80 college scholarships have been awarded to Yale, Harvard, Stanford, Villanova, Wharton, Georgetown, The Citadel, U Mass, Carnegie Mellon and more. The proceeds from Molly’s album “California Girl” will help towards the expenses of tennis tournament entry fees and travel costs, and became available for purchase on Jan. 1, 2017 for $6.99 via iTunes, Apple Music, Spotify, etc.

“The EP has six songs on it, one of which, ‘Who Are You,’ is focused around the foundation and is a video on YouTube at mollybergmanmusic,” says Molly, who still plays tennis at Turnberry’s academy courts when she’s in town, hosts annual summer beach getaways for as many kids as possible, takes part in group videos, and participates in the foundation’s program and leadership retreats whenever she can. “The rest of the songs are about being 14.”

“She decides what she wants to write about and then Martin helps her with her lyrics and rhymes,” Rita chimes in. “Molly writes all the melodies and she can’t watch TV until she writes a song. She just wrote a song about her mom called ‘A Woman I Never Knew.’”

Molly was adopted as a baby by Rita and Martin who started her on piano lessons when she was five. Rita, who plays piano, taught her initially then got her a new piano teacher in Las Vegas three years ago. When Molly was seven, Rita and Martin took her to a Hannah Montana concert at MGM Grand, which inspired her to play the guitar, which she just picked up and began playing. When she was nine, Molly wrote her first song, “Ocean Dream,” inspired by the Los Angeles ocean. The family maintains their Las Vegas home at Turnberry Place as well as a home in L.A. and goes back and forth between the two. But it’s evident that Molly’s foray into the public arena is very much a family affair.

“Our focus is mainly on Molly,” Rita admits. “She has written at least 12 songs and does a lot of singing locally. She opens for me and she opened for Michael MacDonald at The Avalon in L.A. and also opened for Louie Anderson. She also does art fairs and Christmas tree lightings and sings at malls and such. I’m still traveling but Martin spends most of his time chauffeuring her around.

“I still love doing my show and recently did a two-person play doe a month at the Laguna Playhouse,” she adds. “I was going to do a podcast with Louie Anderson – it was either going to be called ‘The Louie and Rita Show’ or ‘The Rita and Louie Show;’ we couldn’t decide – then he got ‘The Basket.’ Martin did just write a mini-series about Las Vegas, however. It’s a satirical piece involving a fictional casino and what we’ve experienced in 10 years here. I think we’re also going to write another play – we did our ‘Room 776’ here in Vegas and did a play called ‘Tickled Pink,’ which was based on my book. I love writing with Martin. I sit with my feet up on the desk and we laugh. Then we have lunch.”

As for Molly, Rita makes her biggest admission yet.

“It’s never too early to start earning money to support your parents,” she quips.