It's Reigning Men Once Again 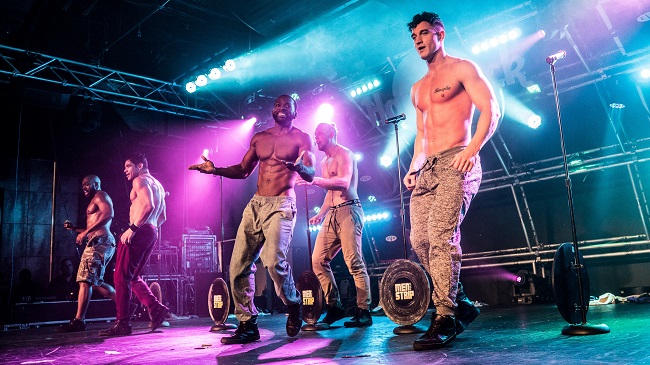 The burger sliders at the VIP party before the show were a yummy touch but it was the beefcake and buns served up after the party that truly embodied the spirit and spice of the evening.

The newest male revue in town, “Men of the Strip,” launched in a limited run at Hard Rock Live! on the Las Vegas Strip the other night to a frenzied crowd of excited females. Created and produced by Jeff Timmons of the band 98 Degrees, who also currently guest stars in the show, it is true to the format of hard-bodied guys who charm and dance their way into the audience’s hearts – and wallets. But besides collecting those famef dollar bills in the waistbands of their thongs for the above talents, these guys give a whole new meaning to the word “well-toned” – in a unique twist, they also sing for their supper.

“Ever since I was a guest star in The Chippendales show a while back, I had been thinking that it might be fun to do something a little glossier,” says Timmons. “I wanted to do something that would meld pop culture with a cabaret type of show, like an edgier boy band. We searched all over the country to find charismatic personable guys who could both sing and dance. Glenn Douglas Packard, who choreographed Michael Jackson, Pink, and the Latin Grammys, choreographed this show. I also wanted to step up the dance numbers. It is the talent of the cast that separates us from other male revue shows.”

Timmons explains that although more than 400 men auditioned for the show in four cities – L.A., New York, Miami, and Las Vegas – it took a couple of years to find the right ones. While he was attempting to find them and put the show together, he ended up going back on the road with 98 Degrees. Their first tour, in 2013, was with Boyz II Men and New kids on the Block.

“We never really broke up,” Timmons reveals. “But in 2001, we went in separate directions. I had two small children and I wanted to get off the road and spend time with my family. The other guys had obligations, too. But then, a few years ago, we realized how much we enjoyed being with each other and that it was time for us to get back together – the four of us are like brothers. People were glad to see us back. We’re super-lucky. You never know what’s going to happen when you’ve been away for so long. That’s why we decided to make a comeback with those two groups. We figured that we couldn’t go wrong going out with legends.”

As for dividing his time between 98 Degrees and “Men of the Strip,” Timmons feels that he can successfully do both.

“98 Degrees will be going on a Christmas tour to 33 cities across the United States,” he explains. “We’re in the studio recording a holiday album right now. ‘Men of the Strip’ has three more dates at Hard Rock Live! – July 21st, July 27th, and July 28th. Then we’ll decide whether to do a residency or take the group out on tour.”

One thing’s for certain – your temperature won’t stay at 98 degrees either way.