Tom Arnold: Rolling with the Punch-lines 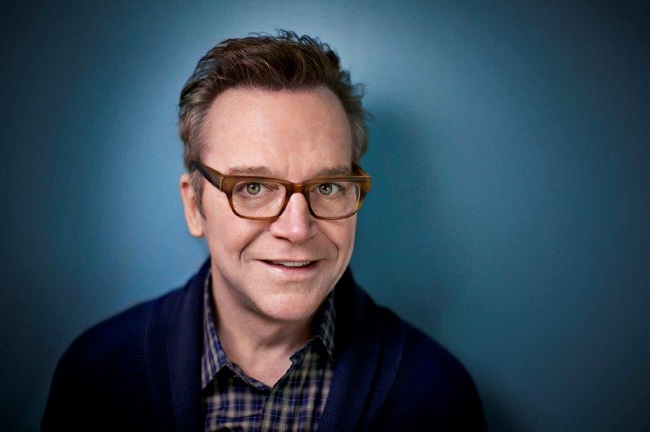 The first time I ever saw Tom Arnold in person, he was hilariously attempting to lift his then-wife, Roseanne, portending to be a chanteuse, onto a piano on stage in an Atlantic City casino.

While undoubtedly Roseanne was a bonafide heavyweight – in more ways than one – luckily, Arnold was still able to “stand up,” afterwards as he will be doing September 15-18 at the Laugh Factory at the Tropicana in his Special Event Las Vegas debut. And although he and the comedienne divorced in 1994 after a four-year marriage, piano aside, he has continued his career on a high note, as opposed to it going flat as some thought would happen when he and Roseanne went their separate ways.

“Within three months of her filing for divorce, people were saying that I was done in Hollywood,” he recalls. “I didn’t care – I knew I had some kind of talent. People also thought that I had gotten $50 million in our divorce settlement while in actuality I didn’t get any kind of alimony or a settlement although I could have gotten that money – I regret it now (he laughs). But people can believe what they want, I came to Hollywood to write for ‘Roseanne’ and ended up spending six years on that show. I never dreamed I’d be that lucky,

“In my stand-up routine, I talk about things that people can remember but from my perspective,” Arnold, who is never scripted, adds. “’Roseanne’ was the first show I wrote for and my marriage to her was my first marriage. It was a long time ago but people still associate. Divorce is rough but it’s easier if you don’t have kids with someone. You don’t have to have negative feelings. What happens to you in life shouldn’t keep hurting you. Maybe it’s my personality but I moved on. And I want audiences to know that things turned out all right. I’ve been married now for almost 10 years and I have two children, a son, four years old, and a 20-month-old daughter.”

The four-time-married Arnold, who is from Iowa, started working on the floor of a meat-packing plant right out of high school, which he says causes one to get very drunk every night. He remembers having crazy dreams about being best friends with Arnold Schwarzenegger and then recalls the surreal feeling of being in a trailer on the set with the actor when he (Tom) got his role in the 1994 hit movie “True Lies,” the film that he notes helped him a lot professionally after his divorce from Roseanne that same year.

“Most of my crazy dreams have come true,” he notes. “I was raised by a single dad with my six siblings and the only time I heard him laugh was when a Bob Hope special came on. That’s when I knew that I wanted to do what Bob Hope did. As it turned out, the first thing I did in Hollywood as an established personality was a Bob Hope special. I think we did a Robin Hood routine together – I just remember that we both had tights on. I got to know Bob and he wrote my dad a letter and also called him. I still do a lot of USO stuff because of Bob Hope and the example he set.”

Arnold just completed what he calls a “sweet movie” called “Saving Flora,” which is about a child trying to save an elephant. Arnold plays a big-game hunter in the film. He is also working on a dramatic movie with Brian Dennehy, Leslie Ann Warren, and J.K. Timmons called “Dying 101,” about the film’s writer/director’s loss of his father. In addition, he has a sci-fi movie coming out in October about giant ants. He has also recently been hired to write a movie and every year, he writes a couple of pilots. He will also be doing a stand-up special in November.

“I have to do four things at once,” he laughs. “If I were George Clooney, I could just be a star and make $12 million a movie. But that’s okay – life has turned out well for me.”

It’s only been recently that Arnold returned to his roots as a stand-up comic. Showtime premiered his first stand-up comedy special on New Year’s Eve, and he frequently hosts the popular “Laughing with the Stars” weekly comedy show at The Laugh Factory in West Hollywood featuring supporting acts ranging from rising young comics to all-time favorites. His shows are famous for their loose atmosphere with Arnold breaking down the walls between his fellow comics and the audience. No one is quite sure what to expect on any given night.

As a writer, producer, and actor, Arnold has established himself to both television and film audiences worldwide, having won such awards as the Peabody Award and a Golden Globe Award. Additionally, he helped put Fox Sports Network on the map with his hosting duties on “Best Damn Sports Show Period.” Arnold currently hosts CMT’s “My Big Redneck Wedding” and “My Big Redneck Vacation,” which premiered at the highest ratings in CMT history. He received critical praise for his role in “Gardens of the Night,” opposite John Malkovich, “The Great Buck Howard” starring John Malkovich and Tom Hanks, “Good Dick” opposite Jason Ritter, and “The Year of Getting to Know Us” opposite Sharon Stone, Jimmy Fallon and Lucy Liu.

For quite a while now, even before he had children of his own, Arnold has also been involved in numerous children’s charities.

“Charity work makes me feel good about myself,” he explains. “It’s highly recommended for people like me. It’s good Karma and I’m not thinking about myself.”

Piano aside again, there are many keys to enjoying a good existence and Tom Arnold seems to have found them all.