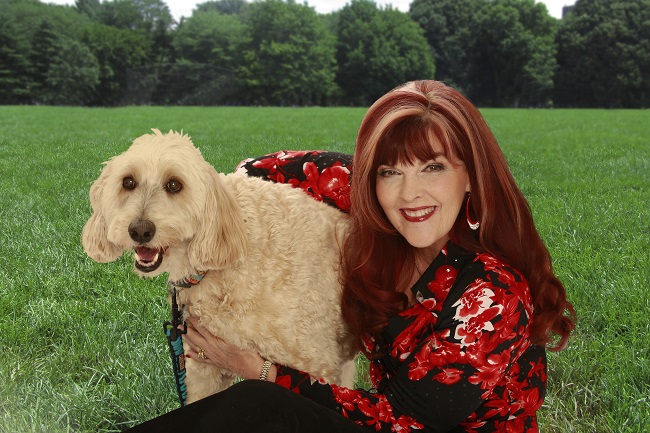 It could be said that singer Linda Suzanne’s performance is going to the dogs.

But, in her, case, that’s a very good thing since on October 15, she will be bringing her show, “Linda Suzanne Sings Legendary Divas of Pop,“ to the South Point to benefit the Friends for Life Humane Society. In fact, two of the that canines that are up for adoption will be walking the Red Carpet right along with her.in a scenario that’s bound to make for a howling good time.

“I was with another animal charity but much of what was taken in was not going to the dogs,” Suzanne reveals. “So I dropped them. I was talking to Las Vegas comedy magician Murray Sawchuck, who is very involved in helping dogs, and he told me that with the Friends for Life Humane Society, 100 percent of donations goes to the animals. They really take good care of the dogs and every Saturday they do adoptions at Petco.”

If Linda Suzanne nay not be a familiar name to you, it is because she is getting back into the entertainment scene after 10 years of being away from it. At 17, she toured with Rosemary Clooney and went on to tour with such names as Jose Feliciano and Jackie Vernon. She was also the opening act at the Miramar Theater, the premier theater in San Clemente, CA, for all the headliners who performed there. She actually opened for Ricky Nelson the night that he died in a plane crash when he set the seats in the back of the small vehicle on fire while he was freebasing cocaine,

“He had been doing cocaine in the back room before the show,” she remembers. “We were told not to talk to him because it wasn’t a good day. His wife, Chris, had thrown him out of the house and he had broken all the windows in the house with a baseball bat. He opened his show with ‘Garden Party’ but sang with his back to the audience and the back of his shirt was sopping wet. His mother, Harriet, was sitting in the audience and kept mouthing to me, ‘What’s wrong with him?’ He sang the first four songs with his back to the audience. He wouldn’t turn around and face them. When the show was over, he left all his guitars on the stage.”

Suzanne’s career was sidelined by the murder of her mother with medication given to her by her doctor. It took her four years but she brought the doctor, whom she learned had murdered four other people the same way, to court and he was convicted. But then Suzanne was faced with an ongoing caregiving issue, subsequently suffering the losses of her godmother and father. Sadly, last year, both of her brothers committed suicide.

“My husband, John Wackerman, is a famous drummer who has been Terry Fator’s musical director since 2007,” she says. “About eight months ago he said to me, why not go back to work? I wrote the whole show myself; it took me four months to put it together. It takes in music across the board from the 60s to the 2000s, I borrowed a couple of Terry Fator’s band members and Donny and Marie’s dancers and I’m donating 100 percent of the proceeds.”

Suzanne has an eight-year-old adopted Labradoodle named Wacky and while her initial plan was to donate 100 percent of the evening’s proceeds to Friends for Life, since the horrific events in Las Vegas that took place on October 1, she will now be splitting the proceeds and giving 50 percent to the Vegas Victims Fund.

It will be an evening that offers the perfect “paws” for reflection.