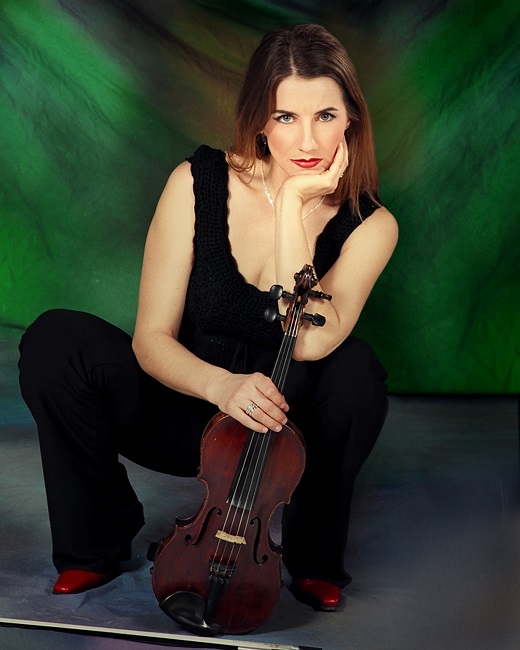 If you’ve been searching for a truly fun and authentic Irish evening, musician Maire Egan will be the first to tell you that the jig is up --and so is the wonderful music and fine food and drinks -- at Nine Fine Irishmen at New York-New York.

Playing the music that makes you dance – as in jigs and reels -- Egan is the real thing, Originally from Ireland and living in the United States since 1997, for the past seven years, she has been the featured singer and fiddler with the five-member Gaelic band Sin E RI Ra (which in Gaelic means “mayhem in a fun way.”) that performs at the venue six nights a week all year round. The only solo instrumentalist in the group, she even does a bit of Irish step dancing as she plays. And she comes by it all very naturally.

“I grew up in a musical family,” Egan explains. “My father, who is 87, still plays the accordion and sings. I picked up the fiddle at 17 and learned it by ear – even though I had played the tenor banjo and mandolin before that, I can’t read music, except for classical piano. But I grew up with Irish music so I know it well. I played in jam sessions as a kid and also performed for patients in hospitals and nursing homes.

“In the summer of 1997, when I was 30, I became a professional musician,’ she continues. “I was living in Germany and running an Irish bar at the time. I broke up with my partner and my sister, who was the accordionist for and touring with Michael Flatley in ‘Riverdance,’ called and told me that they needed a replacement for Eileen Ivers, one of the fiddle players in the show, which was going to Australia for a month. I moved to the United States from Germany and stayed with my brothers who live in Portland, Oregon, and spent an entire month learning the music for ‘Riverdance.’ My sister had played all the pieces on her accordion and had taped them for me and I learned from that. After Australia, I came back to Portland.”

Shortly after that, Egan became one of the fiddlers in Flatley’s new show, “Lord of the Dance.” For eight years, she toured with that production in America, Canada, and South America. When she was off the road, she would come to Las Vegas and play with the “Lord of the Dance” permanent production, which was at New York-New York for five years, Then, from 2001-2004, she was a fulltime player in the show, which had moved to The Venetian. That’s how she ended up living in Las Vegas permanently.

“When that show closed in 2004, I started a girl band called The Birdies,” Egan says. “My partner in the band was Brenda Curtin, who was part of the Vegas troupe in ‘Lord of the Dance’ at New York-New York. We met one time when I worked that show and then again when we both worked in it at The Venetian. In 2004, we recorded two CDs here and then went back to Ireland and got radio play. In 2005, we did the Irish Festival in Milwaukee, Denver, Chicago, Dublin (Ohio), and Kansas City. We also did corporate gigs. For two-and-a-half years we performed at a pub called Raghan Road, which is a famous road in Ireland, at Disneyworld in Orlando. Brenda got married three years ago and moved back to Ireland but The Birdies are still going if I get a call.”

It was in 2009 that Egan got the call to come back to Las Vegas and join Sin E RI Ra at New York-New York. She has been performing with them ever since. The band has its roots in Irish folk music but they are very diverse so they do all kinds of Irish music. They also cover a lot of the music of Irish/American and Irish/Canadian bands as well.

“We’re a very hard-working and dedicated Irish band,” Egan acknowledges. “We’re very authentically Irish and we even have a world-class Irish step dancer. We are a request-based band and we actually get a lot of requests for Irish music that dates back to the 1800s.

For me personally, it’s the connection with people that I love the most,” she sums up. But the best thing is that I just love music; I AM music. I feel so blessed doing it because I know it’s exactly what I’m supposed to be doing.”

Her Irish eyes keep on smiling.