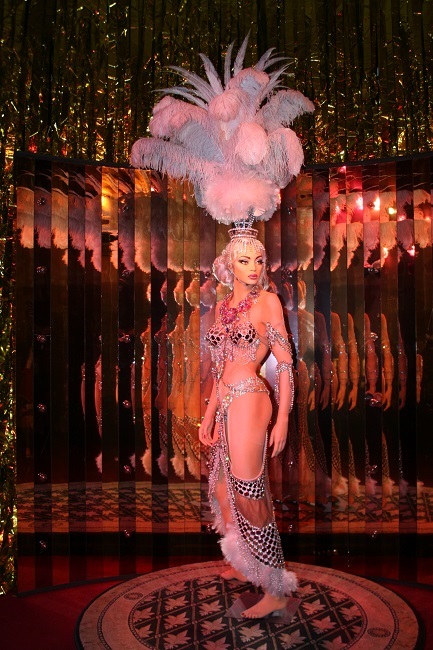 The city’s historic mascot, the iconic Las Vegas showgirl, may have disappeared from its stages but the world’s only showgirl museum is ready to show that it is an entity that has legs – and long-standing ones, at that.

Currently housed in “Boylesque” star Kenny Kerr’s old mansion in Paradise Palms, Grant Philipo’s Las Vegas Showgirl Museum is looking to expand into a 65- to 70,000-square foot venue that can accommodate its collection of 30,000 artifacts that includes more than 1,000 mannequins adorned with the gorgeous costumes of the great Las Vegas extravaganzas, the value of which is so great that it can’t even be determined and has been deemed “priceless.” Just 100 pieces of the collection were appraised at $15 million. Many of those artifacts are currently residing in four different warehouses in Las Vegas.

For more than two years Grant Philipo's Las Vegas Showgirl Museum has been in conversations with Mayor Carolyn Goodman and City Planners to relocate their collection of over 30,000 artifacts into the original home of a Mormon Church on Las Vegas Blvd. Currently known as The Reed Whipple Building. In November of 2016, the museum, along with a few others, made a formal proposal for the building and have waited for a response, which they have been told will come in June of this year.

A non-profit, "The Society for the Preservation of Entertainment History,” created for the preservation and restoration of the collection, has put together a group of private investors and fund raisers to raise the monies needed to solidify a home for the museum. Past co-owner of The Tropicana Hotel & Casino, Fred Doumani, spearheads the group. The 50-member board of the museum includes influential Las Vegas residents ranging from former hotel owners to politicians, business owners, headliners, and former showgirls.

“Once we find the venue for the museum, our team is confident that we will raise the funds to complete this project successfully,” Doumani said. “It is going to be spectacular and our team is experienced in many different areas.”

The one-of-a-kind collection contains costumes from famous designers Bob Mackie, Pete Menefee, Michael Travis, Bill Hargate and others and artifacts from producers Donn Arden, Barry Ashton. Frederic Apcar and more. It also takes in shows from Paris, New York, Reno, and Lake Tahoe, as well as movies and television shows. In addition, there are costumes and jewelry worn by such stars as Ann-Margret, Carol Channing, Raquel Welch, Lynda Carter, Rosemary Clooney, Omar Sharif and Liberace as well as on TV shows such as “The Donny and Marie Show” and “Rowan and Martin’s Laugh-In.”

Philipo, the creator and curator of the museum and a former performer and show producer, has plans to include a theater that will be home to an authentic old-Vegas-style spectacular as well as a school offering all-day full classes for those interested in learning dance, technical techniques, how to design costumes and build sets, and how to get hired for a show. The actual production show will take place at night. Philipo produced the second largest show and the second-to-last show to ever play the Dunes, “90 Degrees and Rising.”

“The museum will be a totally immersive and continually moving experience for visitors,” said Philipo. “The mannequins will turn and there will be the authentic sets, videos, pictures, scripts, music and more. When those shows existed, the showgirl was the image that drew people to Las Vegas. Since the closing of “Jubilee!,” she has still existed on the city’s website but is non-existent on the entertainment scene. We are intent on keeping her image and this incredible part of Las Vegas history alive. This museum will attract visitors from all over the world and will bring new business to whatever part of the city it is housed in.

“Each room in the museum will be themed like a specific show,” he added. “It will be like stepping into a showroom and onto the stage. We’ll have chorus lines of mannequins and guests will be able to take pictures that make them look like they are right on stage with the casts of the various great Las Vegas shows in the city’s longtime history. It will be an up close and personal experience. We will also give VIP tours. We aren’t going to hide the topless aspect, either.”

This museum in a home has already received recognition from Jon Porter, Harry Reid, and Mayor Carolyn Goodman and has been awarded “The Coolest Museum” in all of Las Vegas by Vegas Rated Magazine.

The heart of Las Vegas rests within its amazing entertainment history found within Grant Philipo’s Las Vegas Showgirl Museum. But home is where the heart is and all involved in this project are hoping that a venue is in its near future. The destiny of the history of the showgirl is in the City Council’s hands.

The public is welcome to check out the video about the museum narrated by Robin Leach at www.lasvegasshowgirlmuseum.com and join the call to action to help the museum find a public venue.

Grant Philipo started this collection in the late 70’s. It got a big boost when Grant became friends and was hired by Liberace’s Designer, Michael Travis, as Liberace’s fitting model. Michael learned of Grant’s love for historic show costumes as well as his ability to bring them back to life. He connected Grant with many iconic designers and show producers who offered their collections to Grant because they knew he would bring them back to perfection and even use them in the shows he produced.

While Grant was Artistic Director for The Hollywood Wax Museum and worked for Guinness World Book of Records Museums, Movieland Wax Museum, Fong’s Wax Museum in San Francisco and others, the word spread about his talents for restoration and more doors opened offering him TV, movie, and celebrity costumes as well as original sketches, programs from all over the world’s spectaculars, etc. In 1992, Grant met and became business partners with Maryadelia Mantle, the wife of Mickey Mantle’s brother Roy, and together they produced Grant Philipo’s “90 Degrees and Rising” at the Dunes.

With Maryadelia’s help, they were able to greatly expand the collection to include the Lido Jewels from Donn Arden’s show “Allez Lido” at the Stardust as well as costumes and props from Ted Lorenz’s “Enter the Night.” Their friend, Stephen L. Veater, helped them acquire the original opening costumes from, Donn Arden’s “Jubilee!,” which debuted in 1981 with a cast of 140.

When South African producer Errol Manoff passed away, he left his vast collection to Grant. Along the way, Grant partnered with magician Dallas Fueston, who aptly named the museum and has been at the forefront to see the culmination of its goal of being placed in a huge public venue for all to enjoy, displaying the more than 30,000 costumes, sets, curtains and more from most of the now imploded landmark strip hotels and showrooms, along with props, press, designs, videos, and programs from spectacular shows all over the world with a lion’s share of it being the Las Vegas Parisian-style spectaculars.